The Burlington Chilly half marathon, the unofficial start of spring race reason in our little corner of Ontario. I have a soft spot for this race - it was my first half marathon ever. Last year I ran it as a training run because I was coming off a sprained foot and hadn't had time to build any speed yet. This year, I mostly decided to run it because a) tradition and b) my husband selected it as his first half marathon. I like the course (familiar!) and the double out and back that lets you see the leaders and your friends twice.

Picked up kits for various people (including Janice, who was my training partner for my first Chilly half), and bought irregular socks from the Running Room expo booth. I'm not entirely sure what makes them irregular, but for $3 I was willing to take a chance. This race comes with a jacket, which is unusual and in theory better than a t-shirt. I really like how this jacket looks, but last year's jacket is an unbreathable nightmare to actually try and wear while running, and this one seems to be the same fabric/design, so I'm not sure how useful it will be.

Race morning had potential disaster written all over it. I'd decided earlier in the week to take Nicole up on her offer of making an attempt at 1:50, with her as my personal pacer, which would be a PB  by over a minute for me (and, since my old PB was set on a net downhill course and the Chilly is relatively flat, hitting 1:50 would be a significant challenge). Going for a new PB with virtually no recent speed training and a possible calf injury? On paper, not necessarily a smart choice. Then the weather decided to go into ultra-cold polar vortex mode, with the added bonus of fresh snow. As I spent 10 minutes scraping the ice off my car on race morning, I was figuring this was going to be an Epic Fail.

Pre race we met up with various Daily Mile friends (my husband: who are all these people?), and attempted to keep warm before the race start. Bringing some instant hand warmers turned out to be a brilliant move, so that I only had to deal with frozen toes, and not frozen hands and toes at the start line. We huddled up to keep warm and sang along to the rather odd choice of start music.

The plan was to run with Nicole, Sam, and the 1:50 pacer. But everyone was hemming and hawing about the road conditions (which didn't look great at the start) and our various ongoing injury issues (strained calf muscle for me, plantar fasciitis for them). Pretty much we agreed to play it by ear and if anyone had to drop back based on injury or road conditions, then they would do so.

This was the usual sorting out positioning in the crowd deal. Not too bad, though, people seeded themselves well in the informal corrals. The roads turned out to be in much better shape than I'd originally feared, although my feet did get wet. It took until about 3k for my toes to thaw out, but my calf was fine, which was the main worry. We settled in with the 1:50 pacer and then eventually passed him. The first 5k felt good. I had my watch under my jacket sleeve so I couldn't actually see the pace, which I really like in races. It's a lot easier to zone out and focus on effort when I'm not glancing at my watch every 20 seconds.

Just rolling along. Even started to overheat a bit, which given the ultra cold temperature was a surprise! Fortunately that didn't last long as the occasional cold breeze would come along to chill me down again. At some point here Sam disappeared behind me, and Nicole disappeared ahead of me. The 1:50 pacer caught up and I chilled with his group, letting him set the pace and just keeping on. I was getting the first inkling that I wouldn't be able to hold the pace, but decided to just keep at it until 10k and then see how I felt.

By 12k the pacer was starting to pull ahead of me - and another 1:50 pacer appeared from behind me? What? OK. I hung with him for a bit but I could tell I was going to need to slow the pace a touch if I wanted to finish the race. 13k was the turnaround. I was still in contact with the 1:50 pace groups, but the gap was ever so slowly starting to widen. I could see Nicole up ahead with the first pace group and waved at her as she passed going the other direction, and she yelled that she would wait for me. Part of me wanted to tell her no, go ahead, run your own race, but mostly I was grateful for the company, because I was starting to get into the dark mental place. You can see by the paces how I started slowing down.

Ah, the long dark miles. 15-20k is the worst part of every half marathon for me. Technically it's not that far but it's STILL SO FAR. The legs are hurting and the brain is wondering why the hell you do this, anyway. At one point I started to look under my sleeve at my watch and Nicole told me to leave it, let her handle it. OK, boss! I appreciate my pacer telling me what to do in races. Not so much the spectator who yelled at us to go catch the 1:50 pacers. Shut up, dude. I focused on my music and tried to zone out and not think about how much my legs hurt and how nice it would be to stop and walk. Nicole yelled many encouraging things at me, only about 50% of which I heard because of my music, but I appreciated the sentiment. Even if I kind of wanted to trip her so I'd have an excuse to stop. I felt through most of this section like I was running through molasses, so the fact only two of those km were over 5:20 is nice to see. Holding those paces was rough. I made many decisions in my mind about never racing again and never running again, as is usual for the late stages of a race.

The 20km sign was a very welcome sight. I was really, really, REALLY focused on the # of minutes left to run. Less than 6 minutes? I can do that. Even if it is so painful. Nicole was yelling encouragement (much of it laced with profanities, which seemed to amuse the spectators to no end), and I only had eyes for the finish line. Good lord that last little bit running up Brant to the finish takes forever. The pain! I crossed the finish and then had to dig around inside my sleeve to stop my watch. 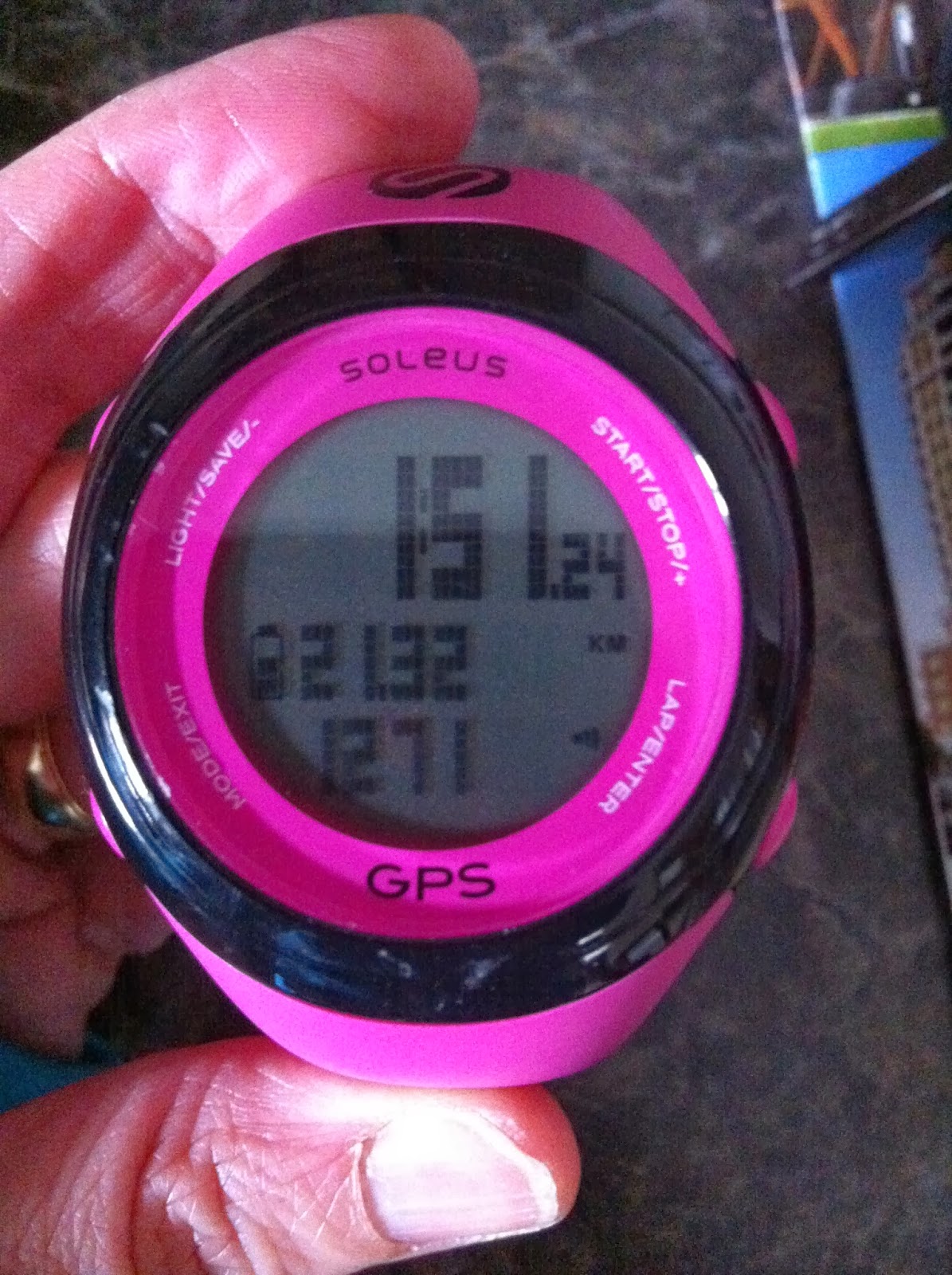 Nicole said we were around 1:51:22, and I could not remember my exact Road 2 Hope time! Frankly, given that Chilly is a flat course I was prepared to consider the Chilly time my real PB even if it was a few seconds longer, since R2H was downhill assisted, but it wasn't until I got home that I found out that 1:51:24 up there on my watch was exactly the same as my R2H time. Eventually the race results were posted and I confirmed my chip time was lower, for a new PB of 5 whole seconds - but given the different courses, it feels like a significant PB. A fairer comparison is probably my Scotiabank time from October, which was 1:53:57. Making great progress.

I'm extremely happy with this result. No, it wasn't 1:50, but I knew going in that 1:50 was a long shot. I'm pretty comfortable saying I left it all out on the course in this race. It wasn't a negative split, but that time feels like the best one I had in me on that day, and I wouldn't change anything about the race. Not bad considering my complete lack of speed training! Some well targeted tempo work and that sub 1:50 should be mine.

A great day and a very pleasing result. And it wouldn't have happened without huge support from Nicole. I'm quite liking this personal pacer deal, I really do run so much better with another person worrying about the pace. Maybe I'm just lazy. I mean, as lazy as someone who runs half marathons can be! But seriously, Nicole was awesome and played a huge role in not letting me fade out completely in the last 5k.

After the race my husband (who did successfully finish his first half, although he was fighting an injury the whole way) and I decided not to hang around for the chili and beer, what with having to go get our children (such a drag). But we did stop for donuts!


So, Chilly half again next year? Most likely. I like having it as motivation to keep running through the misery of January/February (especially this year, which has been horrible), it's close to home so no getting up at some stupidly early hour to get to the race start, and I like the course. I know there were some logistical issues this year - from the race Facebook page it appears the timing company messed up quite a few people's results. And they used my least favourite photography company; one that's incredibly overpriced even for race photos, which is saying something. But it's a tradition at this point, so it would be hard not to run it - plus it's a great course for setting a new personal best early in the season!