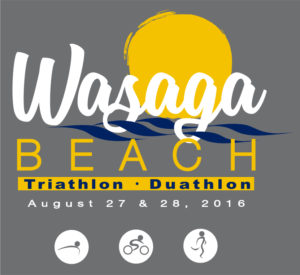 Another race report? Who does back-to-back Olympic tris when they are supposed to be training for a half ironman?

Well, when you win a free entry to the second Olympic, what are you going to do, say no? I was lucky enough to be selected as one of the Recharge With Milk racers of the day for Wasaga Beach this past weekend (hilariously, the other racer of the day was Alasdair, Kyra's husband! So we'd be at the same race again for the second weekend in a row! How cool a coincidence is that?)

In addition to the free race entry, they also sent me a pretty sweet prize pack. 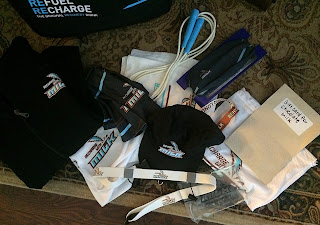 So much swag - and good quality, too. I've been using the giant cooler as my transition bag since it actually has enough room in it for all my stuff, unlike any of my other bags. Hey, it'll work until I get a real transition bag, anyway. The race belt has come in handy already, and I know I'll make use of the arm sleeves this fall. Plus the hoodie, towels, buff-type-thing, etc. Go enter that contest for Lakeside or Georgina if you haven't already! I'm even wearing Recharge with Milk socks as I write this race report!

So enough free advertising for the milk people already. The race report! I didn't have a plan for this race, really, since I was treating it more as a training day. Or that's what I intended. HA. Best laid plans and all.

The Olympic had a late start time (10:30) which made for a nice leisurely morning. I had to drive over from the cottage where we were spending the weekend, which unfortunately was basically the exact same distance I'd have had to drive if I'd come from home, so no time savings there. D'oh. But it was an uneventful drive and the race site has lots of parking, which is always a plus. I arrived way earlier than necessary, got my stuff set up, and then killed time saying hi to a couple of the Tri Chicks, my Iron Canucks teammate Kristin, and Kyra and Alasdair (who I ended up parking right next to. We just can't keep away from each other!).

I wandered along the beach for a bit to check out how it looked (sandy, shockingly enough), and heard them announce there had been a course change for the bike. Since I hadn't bothered to look at the bike course maps at any point, or done any research at all on it, that was fairly meaningless for me. I'd have had no idea if they hadn't said anything! (for those curious, due to a lack of police officers, they turned the bike course into a simple out and back).


There was also a lot of talk during the pre-race briefing about exactly how the run would work, with the two loops, but I couldn't make head or tails out of it and just figured it'd all be clear when we actually did it. These things generally make a lot more sense when you do them. And it's not like I'm front of the pack and have to worry about leading people. There's always someone for me to follow.

Then the usual - wetsuit, start walking to the beach, have Kyra point out I'm still wearing my hat, back to transition to ditch the hat, etc. Usual nonsense.

The lake was warm and calm, so I swam a short warm up. Even with the minimal waves, the marker buoys still seemed hard to spot, though. But hey, just a training day, right? I did make sure to look at the buildings around the swim exit to try and find something I could use for sighting on the way back into the beach, Oh, a nice bright big yellow awning, Perfect.

Hung around for a bit waiting for my wave to start, since my group would be in the fourth wave. Then it was off for one of the calmer swim starts I've had this year. No one kicked me or groped me or anything! I was almost insulted. What, I'm not good enough to swim over?

The swim out was uneventful. I had to sight a little more frequently than usual just because I often couldn't find the buoy on the first attempt, but I was right on target. Soon enough I made the turn and did the short part of the swim than runs parallel to shore. No major issues here and I was swimming alongside a fairly large group.

And then we turned back towards shore.

Fuck. The buildings in the distance were an indistinct grey blur. I couldn't at all make out the yellow awnings that marked the one by the swim exit, and forget spotting the exit arch itself (I know it's brown because of the whole chocolate milk sponsorship thing, but it would be so much better if it was a bright orange or yellow!). And I couldn't see the next marker buoy because the sun was in my eyes. OK, just start swimming towards shore, eventually we'll get it sorted out.

I rapidly found myself swimming completely alone. I could see the line of swimmers I had been in veering off to the left, and one lone swimmer pretty far off to my right. I was sighting frequently and thought I'd identified the right building on the shore to aim for, and I was on target, but the fact that there was no one close to me and that big group still heading towards the left made me question myself. At one point I even stopped to tread water for a few seconds until I spotted the marker buoy - and sure enough, I was aiming right for it. So I got back to work and soon found myself closing in on the shore. I think a lot of people swam some extra distance, though! Funnily enough when I stood up in the shallows to run out of the lake, my watch read bang on 1500m. 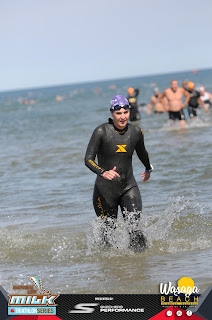 Overall, nothing to complain about with this swim. My first 'real' Olympic triathlon swim, since Goderich (when they have a swim!) only has a 1000m swim.

A 2 minute T1 is what happens when I put my helmet on backwards and the official makes me re-rack my bike before I can fix it.

So that whole 'this is just a training day!' thing lasted until I made the first pass on the bike.

Bikes are fun. Passing people on the bike is even MORE fun.

Yeah. I had a good time with this. 40k is kind of my racing sweet spot I think on the bike - long enough to be a challenge, but short enough you get to really push hard. Plus, I made double triple extra sure my rear wheel wasn't rubbing or off centre and it just felt FAST. Very happy with this effort on a mostly flat and straightforward bike course!

Well at least I managed to get through this without attracting the attention of any officials.

*I was initially listed as third, then fourth, and then suddenly when I sat down to write this I was down to 5th. Kind of ruins the whole symmetry I had going with finishing 4th at all my MSC races this year...

Double loop run. Ew. Not my favourite, especially when it's mostly on a fairly narrow shoulder and you have to deal with passing other runners and the people heading back towards the finish. And the scenery was nothing to write home about, since it was mostly going past some fairly derelict looking cottages and run-down motels. This is not a particularly scenic race, to be honest, other than the swim.


I had low expectations for my run performance in general, since this was supposed to be a training day and I'd done a 10 mile long run the day before. I spent most of the run waiting for my legs to notice what we were doing and decide Oh Hell No We Are Done With This Bullshit.

But it never happened. It ended up probably one of the best feeling runs I've had all summer! The heat didn't bother me at all (it helps that some cloud cover blew in just in time for me to start running), and I felt downright good. Even pushed the pace a bit towards the end. Kind of makes me wonder if I could have gone under 55 minutes if I hadn't run that 10 miles the day before the race! 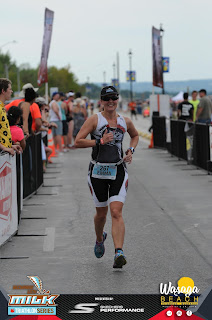 So hot damn. Super happy with that finish time! I hadn't really set any goals for this (training day, ha), but if I had something like 2:55 would probably have been it. Under 2:45? Sweet! I really enjoyed the race overall, and would definitely like to do it again. In fact, I really enjoy the Olympic distance in general. It kind of makes me want to focus on that distance for a season. The swim is long enough to feel like a challenge, the bike is long enough to be fun, and the run isn't so long I hate myself. And the 10k run is way more in my wheelhouse than the longer stuff.


Next up, Barrelman! I'm really glad I won the entry to this race - I was feeling pretty blah and unenthused about training for and doing Barrelman again, but having a great day at Wasaga has reminded me just how awesome doing a triathlon can feel. I'm excited to wrap up the last big week of training this week and then it'll be taper time.

(And then time to think about what comes next, but that's a whole different kettle of cats and let's not talk about that now. Big decisions to make there.)
Posted by Emma at 7:51 AM