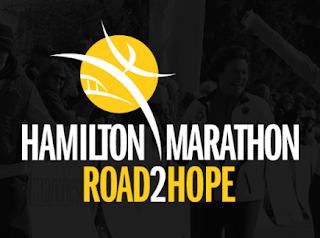 It hasn't really been a secret that running hasn't exactly been my friend lately, considering I've been bitching and moaning about it for weeks, if not months. I'd been largely attributing the suckitude to the whole hot & humid summer thing... but then we got into the fall weather and although running started to feel better, my paces were stubbornly sluggish.

Then, a couple of weeks ago, for the first time in at least 6 months, I stepped on our bathroom scale, shrieked, changed the scale battery, and then stared in disbelief at the number that remained stubbornly the same. And significantly higher than I expected.

I think I may have figured out the root cause of my run paces slowing. Well, that and the whole only running like 28k a week. Low mileage + more weight is not really a recipe for running success.

So. Bit of a weight loss project underway over the new few months. Nothing fancy. Fewer simple carbs/junk, lots of veggies and lean proteins and good fats. Less snacking. More water. Hopefully I can retain most of the nice cycling muscles I built up over the summer, while shedding some of what is mostly definitely not muscle in a few other places.

OK, so there's some background. With ATB training approaching fast, I knew I would have to figure out target paces, and with that in mind I signed up for the 5k at Road to Hope. At least a 5k is over quickly, right? I was also hoping to recapture a bit of my love of running by doing a short race.

The race wasn't until 10, so we had a pretty leisurely morning getting both myself and the kids ready to go. Since my husband would be running the full marathon on the Sunday, he of course wanted to come and pick up his race kit at the expo as well. But, being the type of people we are, we still left really early to make sure we'd be able to find parking. Has science isolated the 'chronically arrives too early for everything' gene yet?


We got our kits (nice lightweight long sleeved shirts this year in a choice of colour - I went with pink), I chatted with the NUUN rep for a while, the kids enjoyed free hot chocolate from the Tim Hortons truck and played on the playground, and eventually it was time for me to shed all the layers and do a warm up.

I ran an easy 3k to warm up with a few strides, sweet talked one of the medical volunteers into letting me through the fence on the lake side of the start instead of making me walk all the way around to the real entrance, and it was time to go!
You might have noticed the headphones in that selfie - I stopped running with music before ATB last year and haven't missed it, but a 5k seemed like a good time to bring the tunes back. Really, I just figured I could use all the motivation I could get!

We counted down, shuffled forward, and it was time to GO.

5k of suffering hard. All the pain crammed into much less time. Such a terrible race distance.

After starting my watch and dodging around all the slower people over the first couple of hundred meters, I flipped my watch display over to the 'suffer score' screen, which literally just displays a single number, starting with 0 and climbing as the difficulty of the workout increases. I didn't want to know my pace, since I had no idea what to aim for and wanted to run by feel instead.

The first km was over a gravel road, which I had forgotten about from doing the MEC race on (almost) the same course. Also there was a small hill. Which I had also forgotten about. Ugh. I tried to settle on a speed that I felt like I could hold, and resisted the urge to flip my watch back to one of the more informative screens.

I was not expecting to see something that fast. OK, just hold on. Maybe we won't totally crash and burn.

Sure enough, sub 5s were not in the cards. But each split was still a surprise when it popped up, because it really didn't feel like I was going that fast. I just focused on holding on and ignoring my brain suggesting that this was stupid and we should really just stop and lie down for a bit.

There were also a lot more little inclines that I remembered on the Waterfront Trail. Something about running an all out pace makes them seem a lot bigger...

Kind of felt like I was running through molasses for this entire km. Fortunately, my phone shuffled up my current 'makes me want to run right through a damn brick wall' song, and I think that helped.


As I rounded the corner and sprinted (such as it was) towards the finish, the clock time was still at 24! I wasn't going to make under 25, but it felt pretty amazing to get that close. That was the best case scenario I had in mind and I hadn't really believed it would happen.

Oh yeah 5ks are pretty much the worst. Chiptime 25:08 which way exceeded my expectations considering how much running has sucked the last few months. Almost feeling excited for Around the Bay training! #running #roadtohope2016 #teamnuun #ironcanucks
A photo posted by Emma I (@egrrrl) on Nov 5, 2016 at 7:45am PDT

So that's overall a big confidence booster. The run speed is still in there somewhere. Time to get serious with a whole training plan and whatnot and see where that takes me over the next few weeks/months.

Sunday my husband was running the marathon, and in addition to being his race sherpa, I also volunteered as a lead cyclist for the half marathon.

Getting to watch Blair Morgan run a blazing 1:05:55 half was quite a cool experience! I didn't have much to do since it was early enough there weren't many people out on the waterfront trail to shoo out of his way, so I mostly just got to marvel at how fast and consistently he was running.  His km splits were like clockwork. Very, very impressive half marathon debut.

Then I got to ride back up to the start to retrieve the car, which meant a super fun climb up the escarpment. All the elevation drop you get in the R2H half and full had to be made up - but instead of being spread over 5k, it was condensed into about 800 metres. Good times. New Mountain Road in Stoney Creek. I may have to revisit that one. It's a little different from most of the other escarpment climbs, in that it was steep the whole damn way - most of the climbs around here you get a steep climb, a break, and then a short final climb. Not this one. No breaks, just suck it up and get your ass up the hill.

Then it was back to the finish to see my husband finish his first marathon (yay!) and get him home. Plus the race director stopped me and gave me some race swag for the bike marshals as a thank you. Nice!

So a good weekend and a lot of fun all around. Next up is the Egg Nog Jog (for which the primary goal is create an even cuter Christmas outfit than last year. It's coming together...) and ATB training!
Posted by Emma at 1:20 PM