The big question Sunday morning from absolutely everyone: How are you feeling after yesterday??!

The answer was - fantastic. I honestly felt like I hadn't even raced the day before. Realistically, the sprint distance is a drop in the bucket compared to the overall hours/miles I've been putting up, so it wasn't that surprising that I was feeling fine. But there was a nagging worry in the back of my mind: at what point would the effort from Saturday catch up with me on Sunday? Because it seemed likely that at some point the fatigue was going to hit. But when?

Sunday morning my husband decided to come along, and so he drove us to the race (which made it a lot easier to eat my breakfast, such as it was. Race morning food is tough to swallow. Literally.)

Pretty much a repeat of the day before. Pick up the kit, get the shit organized, say hi to friends, tell everyone, yes, yes, I feel great right now. There wasn't even really time to be nervous.


Total sense of deja vu as I got into my wetsuit and headed for the canal for the second time in two days. The swim exit was in the same place, but it would be an in water wave start, with my age group going in the very first wave after the pros. That didn't worry me at all because Barrelman had been the same way, and it wasn't an issue there. (FORESHADOWING)

I lined up towards the back of the wave, but along the cable, and then we were off!

Violentest. Swim. Ever. I've been in mosh pits* where I had less physical contact with people. What I hadn't realized was the waves at Barrelman were sent off 5 minutes apart, so it took longer for the fast people to catch up. In this race, they were only 1 minute apart, so it took next to no time for the speedy orange caps from the second wave to start overrunning us more average swimmers.

*I used to be cool

The other factor was at Barrelman I didn't have the confidence in my swimming to stay on the guidewire, knowing other people would be doing the same thing. Last year, physical contact in the swim made me nervous so I tried to steer clear. This year, I'm a lot more confident and I was NOT giving up my place on the wire! Although that did mean I swam straight into three of the orange marker buoys. In a row. Turning your head and getting a face full of orange nylon is a little bit disconcerting.

In spite of all that, it was really kind of fun. And more than two minutes faster than my swim at Barrelman! One of those rare times you really can compare directly, because the course was identical (it's not often you can be sure a swim course is the same from year to year and race to race).

Transition was a bit of a gong show this time around. My chip came off when I took off my wetsuit - thank goodness it didn't fall off during the swim, it was barely hanging on! I know I fastened it well at the start so it was nearly a causality of that violent swim. I got that back on and into my bike gear, but it took a while. Longer races make me a lazy transitioner.

Settled in on the bike. It didn't feel as good as Saturday, that's for sure. Physically it was fine, but there was a lot of wind (a lot of cross wind in particular) that was seriously annoying, and I didn't have the mental 'YAAAAAAAAAAAAAH let's go GET THIS!!!' that I'd had during Saturday's race. I couldn't remember how far we had to go before we got to turn down towards Lake Erie and with every km that passed into the wind with no turn in sight I was getting more and more restless.

Plus, I was worrying about the run. It was going to be stupid hot and I have never run well in the heat. I think I've mentioned that once or twice before. HA.

Finally the turn came and after riding into yet more wind, we got a short stretch with less wind. This is also when I attempted to refill my aero bottle.

Takeaway lesson: Make sure the lid on your second bottle is screwed on properly. When I tried to empty it into the Aerodrink, all the water squirted out the side of the lid and all over me and the guy who was unlucky enough to be behind me. At least it was water and not some sort of sticky sports drink!

So I hadn't been planning to use the bottle exchange at the halfway point, but given that I was now out of fluids I got to practice that. Yay!

In addition, while flat courses are super appealing on paper, riding one again reminded me that in practice they are just a different sort of challenge than a hilly course. Holding your position for that long without a break is mentally and physically hard. I was relieved when we entered the last stretch and I knew it was almost over.

Although that meant it was time to run...

Overall, I'm satisfied with the bike. I was holding back to half iron effort, and it felt good. Comfortably uncomfortable, as they say. And I was a couple of minutes faster over the common segment between this race and Barrelman, so that's good to see. I definitely want to tackle that distance again without the fatigue of a sprint tri the day before in my legs!

I wasn't in a super hurry to start the run. Have I mentioned how freaking hot it was? Something like 32C plus humidity. Yay!

I ran out of transition and immediately stopped at a porta potty. I took in a lot of fluids on the bike. It was not optional.

I was happy to see all the aid stations - 4 of them on the 5k loop! - and grabbed water at each one. Some to drink, most to dump over my head. The course had a small out and back section, and I was on my way back when I saw Zindine. He caught up to me in short order and I believe my exact words were 'I hate everything about this'.

It was hot. My legs hurt. I was regretting many, many things, like being talked into doing two races back to back on a really hot weekend. WTF was I thinking? As I approached the fourth aid station, I was picturing myself falling into my husband's arms as I finished the first loop and sobbing that I just couldn't go on. I had serious, serious doubts I was going to make it through 15k.

But then something wonderful happened.

Big takeaway #2 from this race? Ice in your bra. If you don't wear a bra, I can't help you, but for those of us who do OMG TRY THIS. It cooled me right off and by the time I was coming through the end of the first loop, I was feeling much, much better. My husband was yelling at me to push harder, and I didn't feel like cursing at him, so I knew I was going to be OK.

Although I did still yell 'This fucking sucks' at Irina.

(Also, you can totally fish the ice cubes out of your bra and suck on them between aid stations. ZERO SHAME. It's far from the most gross thing a triathlete has ever done.)

The second loop felt so much easier than the first. At the first aid station I grabbed another cup of ice, and this time it went half in the bra, half down my back. YOU GUYS. Amazing. I was also taking water and the occasional cup of coke, because coke is my jam during triathlon runs.

The wind, which had been a major hassle on the bike, suddenly seemed like a friend. Since I was drenched with water from the sponge bath volunteers and the melting ice, the strong breeze had a fabulous chilling effect. And by the end of the second loop I knew I'd be able to run the third no problem. 10k in roasting hot weather and I'm feeling...good? Who am I?

The third loop felt pretty good. I even picked up the pace a bit! I think all those miserable runs at lunch in the full heat and sun paid off, because the heat didn't wipe me out completely like it usually does. This is a huge confidence boost going into Muskoka - if I'd had to, I know I could have run another 6k on Sunday. I'm glad I didn't have to, but I could have.

Because of that, I'm glad the weather turned out like it did. Getting that hot weather race experience and seeing that I can handle it is a really big deal for me.

As I closed in on the finish, my husband joined me for a few strides and encouraged me to push hard. Thanks honey, I forgive you for stealing all the change out of my car to buy a drink during the race.

And just like that, back to back races, done! And done pretty damn well, too!

Fourth again! It was a fourth place sort of weekend. And missed my goal of being under 4 hours. If I'd lollygagged less in transition I'd have had it. Well, something to aim for the next time around. 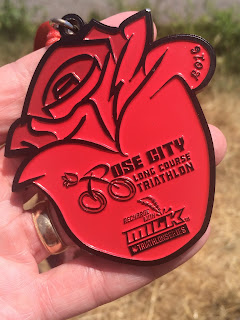 Takeaways? Swim is feeling solid so nothing to worry about there. My nutrition plan worked well, so that's set. I feel like I have a good handle on what my effort level should be on the bike. The run I'm a lot more optimistic about now - the first part of the run on both days sucked hard, but I eventually settled in and felt good. So I know not to be discouraged by a shitty first few kilometers. And based on the fact that I had only a touch of DOMS on Monday (which was pretty much gone by Monday evening), I am in really damn good shape right now. This training plan has kicked my ass right into the best shape of my life. Thanks to Zindine for the suggestion to do these back to back races - they really did turn out to be a terrific way to do the final peak weekend before taper. I learned a lot and had fun doing it!

After finishing I met up with my husband and then jumped back into the canal to cool down (BEST), and then we ran into one of the guys from my tri club who told me there were finisher shirts for us inside the flatwater centre. Finisher shirts!! I wasn't expecting that. And thank goodness he told me because otherwise I probably wouldn't have gone in there.

We cheered Sam into her finish, chatted with Irina & Zindine & Mellen about their races (Mellen also eats ice out of her bra. NO SHAME.), and then it was time to pack up and go. What an amazing weekend!

Now it's taper time for the goal race. I got my bib number and full team kit yesterday (yes, I will have matching shorts for Muskoka!). This is going to happen, and it's going to be awesome.
Posted by Emma at 6:50 AM