Oakville half marathon, plus now what?


I don't have much to say about Oakville, really.

I gave up on putting in any sort of effort about 2k, although that didn't stop my heart rate from being a billion beats per minute.


In no particular order the things that irritated me:

1. The woman I kept crossing paths with who had her iphone in an arm band that was not only announcing her pace to everyone in the area at 30 second intervals, but SHE ALSO HAD HER MUSIC BLARING. Good god, no one wants to listen to your shitty race music (because let's face it, we all make poor decisions when it comes to our race music), and they especially don't want to listen a tinny version of Despacito blaring through your crappy iphone speakers.

(In retrospect, when I reached about 10k it occurred to me she meant the small incline we were running up. And yes it irritated me enough I was still thinking about it 6k later...)

3. Seeing a somewhat well-known local runner drop an aid station cup on someone's front lawn when we were a good 2k past the last aid station and no where near the next one. I still regret I didn't scoop it up and hand it back to them with a snarky 'I think you dropped this'.

5. The gel I grabbed at the aid station was coffee flavour. Blech.

But I got to see my girls (yay!) and I did meet a guy running his first ever half and gave him a high five at the finish, and now we follow each other on Strava, so hey, some good came out of it.

Well, I think I'm going to revive the whole training log aspect of this blog. I'm probably going to want some records to look back on when this whole Ironman adventure deal is done. I will probably start with monthly updates and move back to weekly once the real training starts in the new year.

For now, the plan is to have a solid October. Roughly speaking, that means each week I'm aiming to swim twice, bike three times, run four times, and lift weights (!) twice. 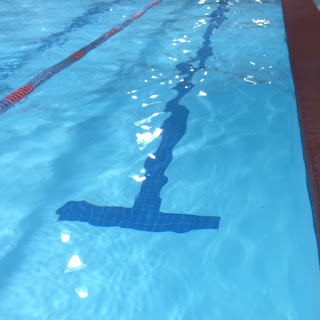 On the swim, I had a chance encounter at the pool with one of the better swimmers in my club, and she was nice enough to hang out for a few minutes, watch me swim, and give me some feedback. It wasn't my imagination, my stroke had gotten wonky this year (I mean, it was fairly obvious given I got slower...) and she gave me some advice about my catch phase that almost instantly brought my times per 100m back down to where I was last year. Woo! So I'm spending some time working on really locking that in, and also a fair amount of time with my fins, since practicing kicking seems to be helping my overall body position in the water a lot.

For the bike, a couple of sessions on Zwift during the week and some outside riding on the weekend while the weather cooperates. Nothing really planned, just maintenance and keeping up the calorie burn. 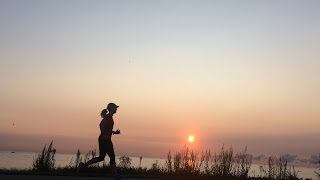 Running, slow and steady, hopefully keeping that heart rate aerobic and building towards getting a little faster in November (the hills in my neighbourhood are not helpful. I have no problem keeping my heart rate down on flats, but any incline just disrupts everything. So annoying). Not worrying about too much beyond just laying down some miles and keeping injury free.

And weights! I've done it four whole times now! I was cautious to start (mostly doing bodyweight/very light weights) but I'm ready to move back to the proper bar for squats and deadlifts and maybe even start working back to the point I can do pull ups. Although that mostly requires some weight loss, which in the post-40 world is proving to be a slow and profoundly annoying process. But now's a good time to work at it, and work at it I shall.

So, I'll be back in a month with an update on how October went. And probably some sunrise and fall colour pictures, because really that's the best reason to get outside this month!