Held off on writing this up since I was hoping the race would add some pictures to their facebook page, but nothing yet and I'm starting to forget what I was going to say! Added some pics to the post via the race facebook page - thanks to the volunteers who took photos!

Last Wednesday I went out to Gullivers for something I'd never done before - a swim/run race. It was a spontaneous decision to sign up the week before, and I almost immediately had serious regrets. What on earth was I thinking, doing a race with my worst sport and the one I'm struggling with mightily lately? Plus I looked at some results from race 1 and 2 in the series, and it was looking like there was a good chance I'd be dead last. Some of the local ultra fast clubs were entering a lot of racers into these races and I was worried I'd be majorly out of place.

I watched the weather all day, since it's been a weird summer for weather with lots of thunderstorms popping up all over the place. I was almost hoping it would be stormy so I'd have an excuse to bail without guilt. But things seemed clear so with some trepidation, I was off to the lake. 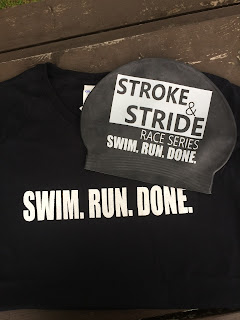 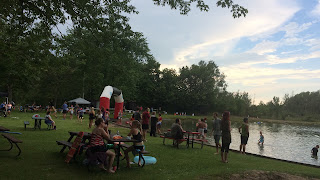 The race site was full of very very very fit looking young people wandering around, and a distinct lack of anyone carrying wetsuits. That did not help my confidence levels much! But shortly after that some people I knew via my tri club arrived and it became clear I wasn't going to be the only one in a wetsuit. Whew. Still didn't help with the feeling I might be dead last and have everyone waiting on me at the finish, but at least there were other 'normal', non ultra competitive people there!

Dumped my stuff in 'transition' and soon it was time to get ready. One of the race organizers explained how the swim would work - two loops, and at the end of the first loop we had to exit through the swim arch, run along the beach, re-enter the water at the start point, and swim the second loop. Hmmmm. If I'd realized that earlier I'd have set up my watch to time the two swim loops separately, but no time to fix it now! The race is about to start!


A much larger group set off in the shorter race (750m swim/5k run), then we waited for our smaller group (18 athletes). Most, if I'm remembering correctly, did end up wearing wetsuits.

To my surprise when we started I wasn't immediately left in the dust, and in fact spent almost the entire first loop drafting another athlete. Unfortunately, when we exited the water at the end of the loop he got ahead of me and I wasn't able to take advantage of the draft on the second. There was a female swimmer near me and I was able to draft a bit from her, but then my sighting went haywire towards the end and I lost her as well.

One valuable thing I learned - when you have to exit the water halfway through the swim, maybe don't all out sprint the 50m between the exit and re-entering the water. I was so out of breathe that I could barely manage to dog paddle at the start of the second swim loop! I was not expecting that short run to affect me so much. Filed that away for future reference.

Pretty happy with that swim, really! Any time I can get under 2 minutes per hundred I'm satisfied. Plus I suspect I swam some extra distance with my massive sighting issues over the last few hundred meters.

Into transition, got off the wetsuit, tossed a tank top over my bra (I wore tri shorts on the bottom), and off to do 4 loops around Gullivers for a 5k run.

I had decided to experiment a bit at this race and wore the shoes I plan to wear at Iron Girl without socks. They were fine up until about 4k, then I could feel hotspots developing. Had a solid, steady, unspectacular 5k run right up until there was 400m left when the ominous clouds that had been building to the west seemed to sweep closer and the wind suddenly picked up from nothing to 'oh shit this might blow me right over'. I hustled my butt over the finish line!

Total time: 59:01
Place: 13/18; 2/6 women
(I'm not really sure of these stats - they are the results on the race website but I think the time may not include transition, because by my watch it should be 1:01. and I'm almost positive the 'unknown participant' who finished just ahead of me was female and I should have been 3/7). 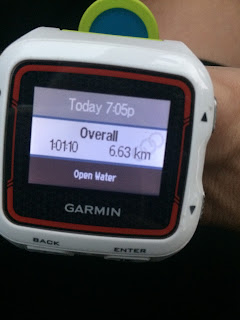 Maybe 5 minutes after I finished thunder was rumbling in the distance and I got out of there just before the heavens opened up and it started to pour.

It was an experience - and I enjoyed it! Good organization, low pressure, and it was fun to do something a bit different. I'm considering signing up for race 4 in September; maybe do the 750/5k and do the swim without a wetsuit, just to push that comfort zone a little bit. Someday I may end up doing a race where wetsuits aren't legal and it would be good to get a little low-pressure experience swimming open water without one. No promises, though!