So the best pre-race prep is spending the Friday night staying up way too late and hanging with your tri/running girls, sleeping in a trailer, and then going for a 60k bike ride where the last 30 were uphill, right? Followed by a hike later that afternoon? 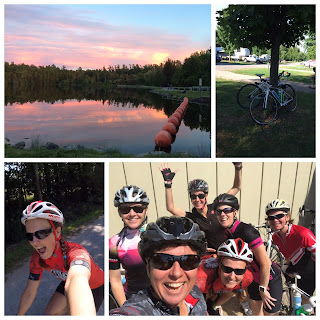 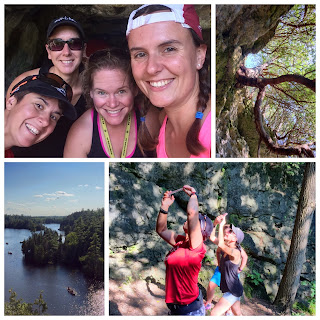 (It was TOTALLY WORTH IT. Grown up camping is awesome.)


In the interest of not completely self-sabotaging, however, I did leave girl’s weekend Saturday evening to spend the night in my own bed (plus, much closer to the race site). Unlike my usual meticulous triathlon race prep, I totally half-assed things and just crossed my fingers that as I randomly tossed shit into bags I wouldn’t forget anything. I didn’t even bother to test ride the tri bike after swapping out the trainer tire! Living dangerously!

Fortunately, when I got to Grimsby and set up in transition, all the important stuff was there. Whew. I did have to stop at the vendors and buy a couple of gels (and some elastic laces for the shoes I want to use for Iron Girl), but that was reasonably painless.


Fab had been successfully talked into doing the race too. And we managed to get him off the idea of doing the duathlon, what the hell man. Although I suspect he regretted that choice once we got a load of what Lake Ontario was up to.

Since the swim had been changed to a straight line swim, we had to walk a couple of blocks to the new swim start – originally I'd been planning to swim it as a warmup, but once I got a load of the wave action there was no way that was happening. We grabbed our wetsuits and….

I couldn't find my goggles.

I have photo proof they were there, but at some point they just completely vanished. I'm not sure if I dropped them or what (I swear I picked them up with my swim cap when we were getting ready to leave transition), but transition just isn’t that big and I couldn’t find them anywhere, even retracing my steps.

And of course, given my entirely half-assed approach to packing my stuff, I hadn't brought any spares.

Fortunately Fab instantly revealed he had a spare set I could use. CRISIS AVERTED. Also his goggles turned out to be way better and more comfortable than mine, which I'd been planning to replace anyway because they’ve been leaking like crazy lately. So now I know what kind to get! Triathlon teammates are the best.

We walked to the swim start, got into the wetsuits with the girls from Fit 4 Adventure (so hard to get into a wetsuit when you are already sweating your ass off in the humidity), and I attempted a short warmup. The waves were really high (although Goderich two years ago was much worse, so I knew I could handle it). However, just standing in the water I was starting to feel a little sick to my stomach from the up and down, so I got out and waited on the shore for our wave to be called.

I was in the third wave so had to hang out for a bit watching the first two. Finally, the horn sounded. The first 100m were a mess – the wave action was crazy, and everyone was kind of bunched up together because you'd basically have to stop to sight the turn buoy and hope you could catch a glimpse of it before it disappeared behind a wave. And when I got to the buoy it was so congested with swimmers I literally had to tread water for a few seconds because there was nowhere to swim! One of the guys near me yelled something about the swim being crazy, and another guy commented that this was the first time he'd ever had a conversation during the swim leg.

I got free of the group after going around the buoy and went a little further to the outside to try and get clearer water, but I was still in contact with other swimmers the entire time. Either having someone run up behind me grabbing my feet, or running into the back of people stopping to try and sight. The buoys weren't hard to spot (the sun was reflecting off them really nicely, making them quite visible), but if you tried to look at the wrong moment all you'd see would be waves and red caps.

The wave action felt less further out from shore, and I settled into just plowing along to the next buoy. I never really got into a rhythm, though, and I knew it was going to be a slow swim. However, my tendency to pull left seemed to work in my favour since it compensated nicely for the waves pushing me right!

Turning back towards shore things got a bit messy. There was someone breaststroking that seemed to be deliberately shifting their direction so I couldn't get around them (I know they weren't but at the time it sure felt that way!), and I could feel the waves making my stomach really unhappy. But soon enough I was at the shoreline and very carefully hauling myself onto the rocks and out of the water. All things considered, not too terrible a time! Given the conditions, I'll take it.

Into transition not moving real fast. Always with the hills into transition. Most of the bikes seemed to still be on the rack, but since they had multiple age groups together and a sizable overflow rack, that didn't mean much. Not my smoothest transition but not my worst, either. As I ran with my bike towards the exit, I saw Fab coming in from the swim, so I knew he wouldn't be far behind me and I’d have to work hard if I wanted to keep ahead of him.

I knew this race had an escarpment climb, and if I'd planned better I'd have driven it pre-race to know what to expect. Alas, when I got off the QEW I had no idea which road was the one for the race and didn’t want to fart around trying to find it. So the hill was a mystery until I got there 4k into the ride.

As escarpment climbs go, not bad. Steepish-bit at the bottom, long not so steep bit in the middle, another steepish bit at the top (with a guy standing there promising it was in fact the top, not the fake top like after the first steep bit!). Not overly pleased with my time up the segment (my hill climbing skills seem to have deserted me this year), but I'm sure I'll get over there to tackle it again sometime.

Once at the top, things were pretty much flat flat flat so I settled into aero and focused on bringing my average speed up over 30 km/hr. While also trying to hold back a little bit to avoid totally cooking my legs for the run. Yes, I know, I never try and strategize the bike! What! But I knew it was going to be hot on the run and I wanted to try that whole crazy strategy of 'pacing yourself'.

Coming back down the big hill was far more fun than climbing it, although I rode my brakes a little too much. Now that I've done it I know the curves aren't as sharp as I thought and it would be doable at full speed. Left a little free speed on the table there, unfortunately.

Back into transition and time to run. Quick change of shoes and I was out.

I started the run feeling…pretty good?

I kept running (as a gazillion dudes motored past me, as is usual), kept waiting for the implosion…but it never came. Spotted Kristin heading back towards the finish, then Anna. Every time I heard footsteps behind me I expected it to be Fab, since I knew he was probably not far back and he’s a faster runner than I am.

Hit the turnaround, and then shortly after spotted him. Uh oh, he's getting close. And naturally that helped a bit with motivation. If he was going to catch me, I was going to make sure he had to work for it!

I pushed towards the finish, including up the two inclines that sure didn’t seem that big on the way out but somehow had gotten steeper, and crossed the finish just under 1:50. Even managed to lay down a 5:22 km at the end – all this slow running stuff I’ve been doing is paying off. The base is coming back!

Grabbed my medal and water, saw that Anna had a snowcone and demanded to know where that came from because that looked like the GREATEST THING EVER. Fab finished within a minute or so (too close for comfort! Damn I gotta work harder to keep ahead!) and we were all GIVE US ALL THE SNOWCONES.


So so so thrilled with this race. I paced it well, everything felt really good, and I finally feel like I'm a real triathlete and fit person again. Nothing like a really good race to help you feel motivated for more, more, more!

Next up is a swim run race on Wednesday night (1500m swim, 5k run), because clearly cutting out my favourite part of the whole endeavor is a good idea. That race report should be amusing. Then I have Iron Girl in two weeks where I will a) actually be tapering for it! And b) going flat out. Looking forward to going deep into the pain cave on that one.

Then I have the Oakville half marathon, where my basic plan is just to keep working on base running and then see how the race goes. No goal time at this point. And then I’ll likely do the Road 2 Hope half if Oakville goes alright.

It feels good to be an athlete again!
Posted by Emma at 12:52 PM