Around the Bay 2016 race report

...and it only took five tries to finally learn how to pace this race properly. It doesn't matter that I intellectually know that going out too fast will cost me late in the race (especially as the distances get longer). Somehow I have to experience it myself to really believe it. Over and over and over again.

I have not been very smart with this race in the past. Although I've gotten better every year!

This year? A+. It was a good day. Two races this year, two PBs. And I continue my streak of PBing ATB every time. Also my streak of terrible finish line photos for the year, although I'd kind of like to end that one.

So how'd the day unfold?

First up, last second wardrobe change with the addition of a vest to all that stuff up there. Since it turned out to be pretty damn cold at the start.

Hung around being nervous, visiting the bathroom, etc, while the running/tri friend crew gathered.

Ivanka was going to start the race with me and Steve, but at some point on the way to the start we lost her (foreshadowing: I could have titled this race report "Ivanka Lost and Found"). We did see my friend Christina and also ran into Mari in the start corral. It's so fun to go to races and meet so many people I know! Some encouraging words, shedding of throw away layers, and we were off.

There were more people in the way this year than I remembered from last year - maybe because of the self selecting corrals instead of requiring people to prove their times, or maybe they just weren't policing things on the way into the corrals. At one point I had to dodge a woman walking. WTF, dude. But overall it wasn't too bad. And it helped a bit to keep that first km on target, as my pacing plan was to try and stay closer to 5:30 for the first few km, then work down to 5:25/km.

Still overshot my target a little bit (it's so hard not to with all the race excitement!) but I kept things largely in check for the first 5k. Looking at some of my past ATBs where I've done crazy things like run the first 3k at 5:17/km?? It's a big improvement in pacing! It helped having my husband alongside reminding me to keep it easy. We also found Ivanka again early in the race for a bit and ran more or less together. At around 5k Steve decided to pick up the pace and disappeared into the distance.

And shortly after I lost Ivanka. Again. She's a tricky one to keep track of! Maybe I need to get her one of those kiddie leash backpacks.

My legs, to be honest, were feeling like garbage through the first 6-7k. It seemed to take a really long time to warm up and get them on board with the whole race thing. So although the race was going well, my confidence was not super high. Which in the end may have been a good thing, as it helped me avoid the temptation to speed up! Took a gel at 8k without any issues.

The wind on the Burlington St section of the course was at our backs, which meant I was a little too hot, but it was handy to have it pushing us up the overpass hills. I don't mind running through the industrial section of Hamilton (to be honest I find it a lot more interesting to look at than the run-down neighbourhoods the race used to go through), but the three additional hills definitely change the flavour of the race a bit.

The run along the beach strip, where I manged to basically waterboard myself grabbing a drink at the water station. You'd think I'd have mastered drinking water at this point in my life. YOU WOULD BE WRONG.

Ended up running behind/with Sam and Nicole for a while, but I was in my own little world since I was in a good pace zone/groove and rudely didn't chat or ask them how things were going. Sorry guys, got my race face on.

When I hit the 15k timing mat at the lift bridge I was feeling great. I was a little ahead of my goal pace, although not so much as to be scary. Just enough to know I had some wiggle room for the hills. And it was looking good to be under 2:45 gun time as well as chip time.

I was in the zone for this section. Took my second gel, and just held pace pretty well. People always say the last 10k of ATB is hilly, but really the hills start right when you turn onto Northshore, with a gradual incline up to King Rd. But I was feeling really good! In fact I was kind of marveling at how great my legs felt. A couple of people from my tri club were out at King with our team flag and I made sure to snag some high fives for encouragement. That sort of thing really helps! Hit the 20k mat feeling like a million bucks.

This is the danger zone. This is where you tackle the two LaSalle Park hills. In my experience, this is where you learn if you ran that first 10k too fast, and just how much that is going to pay you back. IN PAIN. #melodramatic

21 includes the first Lasalle hill. I don't try and kill myself maintaining pace on that one. There's no point. Accept that you will slow down and hope you can make some of it back later. Or that you have enough time in the bank to compensate. Natalie from the tri club was waiting here on her bike and rode a bit of the hill with me, telling me I was looking really good and strong. And I was feeling good and strong. First main hill done. Thanks, Natalie!

22k was also a bit slow because I walked the water station to make sure I got some fluids down. If there's one thing I learned at the Chilly, it's that you can walk for 15 seconds, get down your nutrition, and then restart strong. It's worth the little time sacrifice.

The second Lasalle hill, though. Oh boy. All aboard the pain train. My legs were not happy with the climb, and let me know they were really, really ready for a break. Shut up, legs. I pushed forward and brought the pace back down once I crested the hill (which takes approximately a thousand years because that hill is mad deceptive).

Where Northshore turns up to Plains, it was time for another round of my new favourite game, OMG Hey That's Ivanka! And not the fake Ivanka like the girl I yelled hello at earlier in the race who turned out to be someone else!

It was a happy thing to have someone to run with, because we sort of traded back and forth who was pushing a little harder and who was falling behind. I don't think we actually spoke to each other (I may have muttered some curse words about running in general at one point), but just having someone there is so helpful. I was starting to fall apart a little bit. Not too much, and I kept pushing, but ohhhhhhhhhhh it was hurting. "I'm never doing this race again. Finish this race and you never have to do it again" was about the only thing I was thinking.

In km 27 I was struggling. I felt like I was on the edge of giving up. I remembered how last year I kind of fell apart completely with less than 2k to go. I decided to give myself 15 seconds to get in my emergency bottle of Skratch and hope that would give me a boost to get through the last few km.

Those last 3 km took approximately 10 million years to actually run. It was a bit of a blur. Ivanka fell behind at some point (lost again! Damn it!), and then I realized the guy I was running behind was my husband! I'd caught up to him. He ran with me for a few minutes (I think we made it past the Grim Reapers together) and then he told me to push hard and go. So I did. Dropped the hammer with 2k left, telling myself 10 minutes. Just ten more minutes.

And the arena wasn't getting any closer.

But I could see on my watch I was going to be around 2:43 if I could just. keep. going.

The sheer agony of the run to the finish - and the sheer joy when you hit your goal, the pain stops, and you know you did the best you could have.

I'm so thrilled with how this ended up. I paced it well (which is really clear from my placings through the race - at 10k I was #2001. By the finish I'd moved up almost 400 places!). I was strong. When it sucked I kept going. I earned that PB, not just in the race, but in the many many hours of training I've put in this winter. Very, very satisfying. 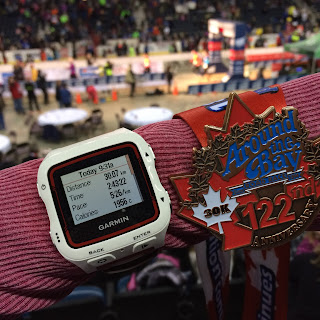 I love this race, and I'll be back again. I've done it every year since I started running and it's my big benchmark of improvement every year. Why stop now?

Email ThisBlogThis!Share to TwitterShare to FacebookShare to Pinterest
Labels: around the bay, race report