Loads o' photos in this race report -  my mom came to the race and took a ton of amazing pictures. Thanks mom!

I was pretty excited for this race - my first Olympic tri! I was not excited about the weather, which was hot hot hot with a side of humid and then a little bit more hot.

I spent the night before the race at my parent's house, and got up bright and early to load up my stuff and head to Goderich. That also let me drive a little bit of the race route on the way, so I knew what I was in for in the first 10k or so of the bike - two substantial climbs and a long stretch of false flat. The rest of the course would largely be a mystery. 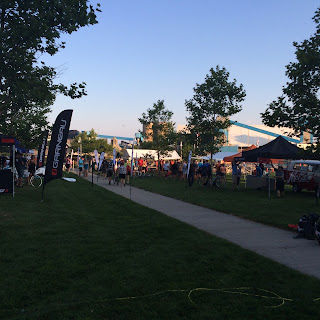 The race site was bustling, but parking was easy and it took very little time to pick up my kit, get marked up, and set up in transition.

Then I wandered down to the beach to check out the swim situation.

Waves. BIG waves. The pictures really don't capture it, but there were pretty massive swells rolling into shore.

"Well that's going to be interesting" I thought to myself and then put it out of my mind, since hey, can't control the water.

At 8 we were welcomed by the mayor, and the race director gave us a few instructions. I used that chance to do the squeeze into the wetsuit. Then it was down to the beach to attempt to warm up and face the waves.

The water was the perfect temperature, but the waves! It was like jumping into a washing machine, and that's without adding 100 other triathletes. I swam a bit to try and get a feel for things, and commiserated with other triathletes in the area about how "interesting" the swim was going to be. And then we lined up to start.

Overheard after the race: "I knew there were hills on the bike course, but I wasn't expecting hills on the swim!".

Which pretty much sums that up. It was crazy waves that I'm pretty sure got bigger further out from shore. And I think my slowest open water swim ever. And yet, somehow, this was one of my favourites. I was completely calm, cool, and collected the whole time. Sure, I couldn't see shit when I was sighting because at least half the time I'd pop my head forward to look and all I'd see would be a bigass wave about to smack me in the face, I was way wide of the course a couple of times, and there were points where I'm not sure I was even moving forward because the waves were pushing me back.

But it was fun! Sort of me against the lake and I just kept on pushing, and it worked. My stomach got a bit cranky towards the end as the waves were coming from behind me and really knocking me around (honestly I think I was starting to get a bit seasick - I've always been sensitive to motion sickness), but other than that this swim was kind of amazing. I never could have imagined swimming in those kind of waves and enjoying it back when I did my first open water swim in May. I'm so glad I've made a point to swim open water at least once a week - I've gotten so comfortable with it that a rough swim like that was not really a big deal.

The race organizers had a couple of shallow tubs of water set up at the entrance to transition so we could rinse our feet, which I have to say was a really nice touch that I took advantage of. Got through transition painlessly and with no screw ups.

The race website gives this elevation map of the bike course:

I plugged the route into Strava and the Strava elevation profile gives a much better indication of what you are in for on the bike:

Yeah, it was pretty hilly. Two big ones right off the bat, then a long false flat, than endless rollers, then finally in the last 8k or so some sweet downhill (and one nice climb) back to transition.

So pretty much my kind of bike course. Loved it. I kept my effort in check and succeeded in keeping my average heart rate to 167, and I got down all my planned nutrition without any issues (currently using Skratch and Gu gels, which I will likely also use at Barrelman). Overall a great ride! Leaving aside the issue of the hills, it's quite a lovely bike course. Perfect smooth pavement the entire way, volunteers at every turn to guide you, pretty country scenery, and very minimal traffic to contend with. Really enjoyable.

Into T2, quick change, and back out. I was feeling pretty good at this point - my legs certainly didn't have the totally dead feeling I had at Niagara, so I knew I hadn't overcooked the bike.

So on the one hand, my time here is pretty craptacular, compared to my open 10k time. But I'm honestly pretty happy with it.

It was brutally hot on the run course, and as I may have mentioned once or twice, I don't like running in heat, not one little bit. So just the fact that I ran most of this is a victory (I did walk the water stations, and two nasty short little climbs right near the end). The other thing with this run course is that the 5k out is essentially a long gradual climb uphill, and that really makes things difficult. It's just enough of a grade to make you wonder why it feels so difficult, because it pretty much looks flat to the naked eye.

On a cooler day I would have loved to try and take advantage of the downhill back, but on a day like this, I was just aiming to get through it.

(Clearly I need to take up winter triathlons or something. Or only do early June/late September races in the hopes of having a cool run!)

Under 3 hours - not too shabby. The swim took significantly longer than I thought it would, although since everyone had to deal with that I think most people's times suffered there (the overall race winners this year both also won last year - and this year they both had swims 3-4 minutes slower). The bike was about what I expected, and the run also took a little longer than I thought. But I'm very happy. First Olympic, done!

Then it was back down to the lake for a quick cooldown (I was daydreaming about this for about the last 3k of the run).

After the race, I met someone who reads my blog, which is a first (I mean, someone other than my friends and family). Sorry, stranger, I didn't even think to ask your name! But thanks for reading, and I hope you and your husband had great races. Naturally he was the one who saw me emerging from the bushes on the run when I had to make a pit stop. I'm a classy gal.

The results weren't posted anywhere, so I hung around for the awards ceremony on the off chance I'd pick up a door prize or a medal (although I didn't think there was much chance of that). I was pretty surprised when my name was called for 2nd place W30-39 - I thought at the most I'd maybe have been 3rd, but I was pretty sure there were too many women ahead of me for even that.

Once I got home and saw the official results it made more sense - because the overall 1st and 2nd place finishers were in my age group, I got bumped from 4th to 2nd for the awards and earned myself a nice piece of bling. Hey, I'm not going to turn down a medal! 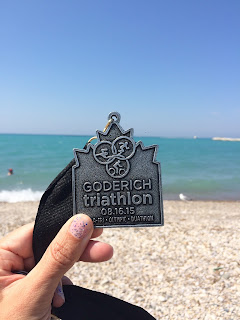 This was a really great day. Fantastic race (one I definitely want to do again), a new distance done, and a confidence builder for Barrelman (still not thinking too hard about the run though).

So that leaves just one more triathlon this year. Bring on the last few weeks of training! (But maybe a little bit of rest first, because my legs are tired!)