So I had quite the weekend! And I've written approximately 1 million words about it because I don't know how to edit, and I'm sure the internet cares about all the tiny details.

When I realized back in the fall that I wouldn't be running the half or full marathon at Mississauga, I was sad. It's a race all my best Daily Mile running buddies usually do, and I didn't want to be the only one stuck at home. So I decided to volunteer (I try and volunteer for at least one race a year), and when I saw that bike marshal was an option on the volunteer form, you know I had to pick that one! I ended up assigned to the 3rd place male in the marathon, and I was pretty excited to be able to see the race from the perspective of the leaders.

But before that, a little road race! 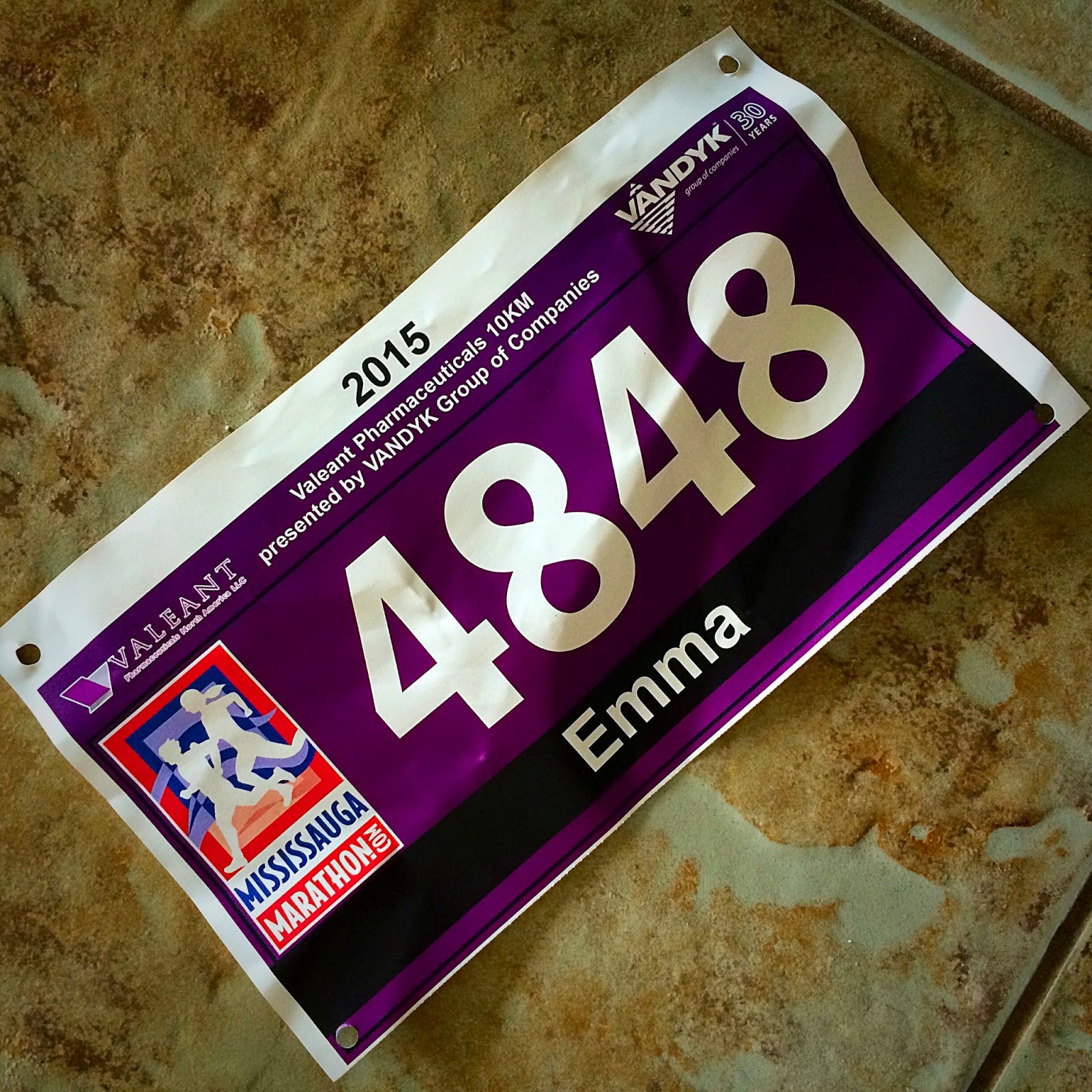 My husband and I decided to do the 10k on the Saturday evening as a date, because if we are going to ditch the kids with a sitter and spend a bunch of money, we might as well get medals and a bag of swag.


The race plan: there kind of wasn't one. I was sure I was in shape to PB (my 10k PB heading into the race was 51:56, but was set over 18 months ago, so it was kind of out of date). I wasn't really sure what to aim for, though, because I've pretty much been a slacker runner for the last month while I recovered from ATB and kicked my bike training back up a notch.

I also knew that the time of day would be an issue - evening races are not my favourite, since it's so hard to get the fueling right during the day and not wind up on the start line starving or overstuffed. Strike 1!

And Saturday turned out to be a fairly warm day. After the winter we had, I am NOT acclimated to warm weather running at all. Strike 2!

And the Mississauga 10k course includes a couple of hills and a lot of winding around paths/corners, neither of which are great for holding a pace. Strike 3!

So I was going in with a vague idea of starting at a 5:08/km pace, because I did a few 8k tempo runs at that pace over the winter, and then I figured I'd see what happened after a few km. But that was as far as I planned, and I wasn't entirely sure what time that pace would translate to. Obviously taking things super seriously.

When we got to the race site we had a lot of time to kill because we're dumb and always arrive places stupidly early. Lots of porta potties and a big park where I lay on the grass and sort of zoned out for a while, eavesdropped on conversations (nothing interesting, alas), and counted the number of lululemon skirts I could see (at least 20).


And it was then I realized there was yet another strike against this race going well - there's a student relay component where students run the 10k in teams of 4 (tagging off roughly every 2.5km). Experienced runners know that kids are the worst, with their fresh legs and enthusiasm and not being old enough to know how much racing hurts. The relay format meant that the entire race would have a continuous supply of fresh legged youth to sprint past me and be all demoralizing. Also, the younger ones have no clue on race etiquette and think nothing of stopping suddenly or making unexpected random moves sideways when you least expect it.

(Note: I'm not knocking the relay as an event - I think it's fantastic that they got 150 teams of local kids to participate and hopefully get them on the path to being runners too. Once the race started I found dodging the kids more amusing than anything else, other than the kid who suddenly stopped dead 2 feet in front of me and almost caused a big pile up. It would be nice if they gave them a little more direction in seeding themselves properly in the start corral - but in fairness an awful lot of adults could use more direction there too, yes I'm talking about you walking lady starting at the front)

Finally it was time to warm up and we got strike #...5? 6? This metaphor isn't working anymore. Anyway, I got a massive side stitch about 300m into the warm up. What. The. Fuck. Pushed through for a bit, since typically I need to find the right breathing pattern to get rid of the stitch, did some ABCs to loosen up, and some strides. The stitch seemed to fade, but I wasn't sure it was really gone.

Then we were off to the start line!


Rod Black (!) did the start line announcements (I'm told he's there every year? Random.) and then we were off. I don't really have that much to say about the race itself - the 5:08 thing was out immediately, as I looked at my watch a few hundred meters in and was running something like 4:48/km. I dialed it back but settled in pretty comfortably in the 5:02 range (maybe - I don't really trust the numbers my watch showed because it ended up measuring short, and I don't think the course was short because it's been certified for approximately forever. So I don't really trust the splits my watch gave me).

I felt great - working hard, but within my abilities - until the sixth km, when I started to slow down. At 7k I stopped at the waterstation to gulp some Gatorade and that really helped. I got back down into the low 5s with ease after the shot of sugar.

At one point a guy in jeans and flip flops went blazing past me like I was standing still. That's a good sign, right? It turned out he was supervising some relay runners, not racing, though, so I guess I can deal with being outsprinted there. Flip flops, sheesh.

The side stitch started showing up again in the last km, but I was able to push hard for the finish line. I yelled something about hating myself when I saw Sam and Nicole just before the finish (I always vow to never race again during the last few km of races), and crossed the line in a new PB by almost 90 seconds!


So yeah! That exceeded my expectations in pretty much every way. Even with a lot of factors working against me. I think it shows what a great training block I did from January through March. I really can't say enough good things about the combo of Trainerroad and Run Less Run Faster! Of course, I plugged that result into the Run Less Run Faster app and my training paces for the summer just got harder. I'm never quite sure how to feel about that...


After wrapping up the post rest festivities and getting a ride back to our car with Nicole and Sam (thanks so much for coming out to cheer, guys!), it was time to switch gears (heh) to Sunday's activity - leading the marathon on the bike. I got all my cycling crap organized and tried to get some sleep.

Up early to get to the start line (plus I couldn't sleep anyway) - I was driving one of my Iron Canuck teammates who'd be running her first marathon, and we wanted to make sure she was there in plenty of time, so we left fairly early. Everything went smoothly and soon I was picking up my sign and meeting up with some of the Daily Mile crew for pre-race hellos.


Then back to the start to join the rest of the lead cyclists while we waited for the runners to swarm towards us. An interesting perspective!


The first few km we all stayed in front of the pack, and then things thinned out enough that those of us assigned to the full could locate the marathoners in among the half marathoners. The top 4 for the marathon were fairly close together through about 12k, but then started to spread out. Once we hit the split from the half at Indian Rd we were up to a few hundred meters between the leaders (and kind of lonely without the half marathoners!), although I could see at least two people behind 3rd who seemed to be closing the gap. There were quite a few lead changes as the early race leader fell back, and some runners who probably paced the early miles more conservatively caught up. Each time the positions changed I reminded myself to follow the place, not the runner.

I successfully followed the course (although I was glad I'd run the 10k the night before and the route through the waterfront trail was fresh in my mind!), did a lot of yelling to clear the trail for my runner when we reached the point where the half and full courses merged, and ate a lot of those nasty spring bugs we get by the lake. The funniest thing was probably how when we'd approach a water station late in the race, all 15+ water station volunteers would be eagerly holding out cups of water and Gatorade to me and my solo runner. It was adorable.

My highlight was around 35k. The guy who was in third was slowing, and 4th closed in and made the pass. Then the new 3rd place realized I was a lead cyclist and yelled 'NO WAY!'. I confirmed he'd moved into third and he said something like 'this is a special day'. I really enjoyed leading him through the last 7k, because although he was clearly hurting, he was also determined and I don't think his pace fell off at all - we're supposed to stay far enough ahead that the runner doesn't get any sort of drafting advantage, and a few times he was definitely moving faster than I thought!


Overall I had such a good time. Not many people get to see the whole race at the front from start to finish. I would be a lead cyclist again absolutely no question. The only real drawback is that despite riding 42k, it wasn't really a workout - even a fast marathon run pace is pretty leisurely on the bike. But sometimes you just have to do something because you enjoy it (and given that my legs were a tad cranky from the 10k race the night before, the long slow ride probably helped them more than anything else would have).

Next up, an easy few days before I start the 8 Days in California Trainerroad challenge, and then the MEC Burlington 5k. It seems a bit silly to do a trainer challenge when the weather is so nice for outdoor riding right now, but I think it will be beneficial to my bike training in a lot of ways. And there are many many many outdoor ride days ahead! The MEC race is going to fall towards the end of the 8DC challenge, so I think a PB there is really unlikely, but maybe it'll be a good experience in running on tired legs. My next run plan doesn't start until May 25th, so I have a few more weeks of flexible 'run what I feel like' before I have to get back to the pain.
Posted by Emma at 6:21 AM