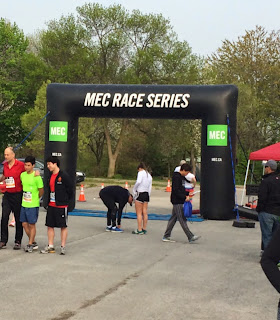 Saturday was my final road race for the spring, before my focus switches entirely to triathlon training. Having already set a 10k PB I can use to benchmark my Run Less Run Faster training plan for the summer, I wasn't feeling a lot of pressure to run this race fast. Plus given that I was six days into the crazy 8 Days in California cycling challenge, a PB seemed like a long shot. But then certain people kept encouraging me to go for it (*cough* Sam and Zindine *cough*) and really, what did I have to lose? Other than possibly my breakfast.

My husband didn't think he was in PB shape but decided to come act as my personal pacer, since my PB pace is pretty much his lollygagging super easy I'm not even trying run pace. Someday he's going to get himself a bike and be instantly 150% better than me. Men are annoying, amiright?

We got to the start early, but less insanely so than usual, got our bibs and chips, and did the usual pre race stuff (bathroom, hang around chatting with people, short warm up).

MEC races are pretty low key affairs. Bare bones, simple. In fact, they only have chip timing at the finish line, not at the start, which means you don't get a chip time, just a gun time. I had forgotten that until we lined up at the start and I realized that although we were fairly close to the front, I was still going to have a 3 second or so differential that wouldn't be reflected in my official time. D'oh.

The race started and immediately went around a corner and across a gravel section of the parking lot? Random. Also kind of sucky. It's kind of a weird course in that it loops around the parking lot and the old campground at Confederation Park - I'm not sure why they don't just run it as a straight up out and back along the Waterfront trail. But I'm not a race director, so I'm sure they have their reasons.

We settled into my goal pace pretty quickly - or at least my watch told me it was my goal pace. However, I forgot to take into account bad tangents and the fact that my watch almost always measures everything long (even on training runs, my watch is almost always 100+ meters ahead of everyone else's by the end). Maybe that's my super power, because it happened with my old Soleus watch, too, not just my Garmin.

Annnnnnnnnyway the first 3k felt really good. I couldn't believe how good they felt, in fact.

The last 2k did not feel good.

The last 2k I felt every minute of the 6 days of challenging cycling I'd done before the race.

The last 2k I was mentally consulting divorce attorneys as my husband cheerfully encouraged me to run faster. Curse him with his easy running and obviously not feeling like he was about to die. There would have been a lot more swearing if I had been able to get any oxygen.

Finally, after far too damn long, we crossed the finish line (at which point I forgave my husband and remembered he's pretty awesome). I was both happy to see that my gun time was in fact a new PB, but a little disappointed I wasn't close to 24 flat. The paces I'd been seeing on my watch during the race would have put me right around 24, so I was kind of surprised when we reached the finish to see how far over 24 we were. In a 5k every second counts!

So it was a PB (by 4 seconds!), and while not the size of PB I was hoping for, given how very NOT rested I was going into this, I'm pretty pleased with it.

And Strava seems to think I did go sub 24, and we all know Strava is what REALLY counts, right? Plus even though it felt like I slowed WAY down in the last km, I only slowed a touch, which is also nice to see.

So, three road races this spring, three new PBs! I really can't complain about that. And really, this last one is gravy, especially since I've done pretty minimal running since the end of March and zero speedwork other than running the 10k at Mississauga.

Big thanks to my husband for the pacing, and being so supportive of my training!

Next up a couple of cycling events, and then (dramatic pause....) TRIATHLON TIME.