This was sort of a bonus race for me - I hadn't originally been planning to run a second half marathon this fall, but then the whole Burlington Skirt Brigade signed up and hell, I didn't want to be the only skirt sitting at home with race envy. I wasn't sure if I was really fully recovered from Scotia, but figured nothing ventured, nothing gained, so what the hell let's try for another PB. The several km of downhill couldn't hurt, anyway.

Amy picked up my kit for me, saving me a trip (thanks Amy!). Nothing too special, and the shirt is...not really to my taste, although it does fit me nicely and is a good quality tech fabric. I'll save it for Canada Day but probably won't wear it otherwise.


I don't really do a big carb load for halfs anymore, but the pre-race burger and fries has somehow become a tradition (um, not the morning of, but for dinner the night before). Hey, whatever works, right?

Carpooled to the finish with Amy, Patty, Sam, and Nicole, and we got ourselves onto the shuttle buses and up to the start with plenty of time to spare (kudos to the organizers for this, the shuttles were plentiful and it all went very smoothly). In preparing for this race I spent as little time as possible thinking about overall paces and such, figuring I'd just stick with Patty and Amy and hope for the best. The stretch goal was to go just under 1:50, and the main goal finish faster than Scotia for a new PB. I went in with only the vaguest idea what sort of paces would accomplish either of those goals. Running blind!

We did the usual pre race stuff (line up for the bathroom, hang out, run into people we know, line up again, etc). One of the people we ran into was the lovely Irina, who I've now met twice and she's just as adorable in real life as she is on her blog (although her blog is dangerous territory for me, since reading it really makes me want to do a triathlon. Must resist the dark side.).

Soon enough it was time to venture outside and get ready to race. Did I mention it was COLD? I knew I'd be fine after a few km, but damn my feet were numb waiting for the start.


We tossed our throw away clothes and huddled up for warmth while they counted down to the race start. And we were off!

When we started, I couldn't feel my feet. It was the strangest thing; like running with bricks instead of shoes. I crossed my fingers they would warm up, because it felt really really weird. Fortunately by about 2k they thawed out and felt normal again. The first 5k were fairly flat, and as usual at the start of the race the kilometers felt short, although my watch was beeping them off right on target (I couldn't see my watch, because it was under my sleeve - a deliberate choice. I'm including the splits in this post but at the time I didn't see any of them).

Red Hill Valley time! This was FUN. All caps fun. Hello big old downhill. The only unfortunate thing was there was a bit of a headwind, and I was really hoping that the wind would only be while we were up high and maybe it wouldn't be so windy by the lake (FORESHADOWING).

Took a gel at 8k; felt good and strong through the downhill and through 10k. Fortunately the downhill doesn't end abruptly; it's fairly gradual so I didn't notice my legs objecting too much as we switched more to flat running. Splits do show a bit of a slowdown through km 10, though.

Off the Red Hill and onto the trail to get the rest of the way down to the lake. Here the wheels started to come off a bit. It all started to feel a lot harder. On the trail there's one very short but steep climb and that woke my quads right up and they were not at all happy. In addition, I was starting to really feel the same groin pain issue I had during Scotia - not nearly as painful as it was during Scotia, but it was really distracting.

The start of the out and back section on the beach path at 14k was mentally really tough; knowing we were running away from the finish line and would have to run all the way back was harder than I expected. Here I think my familiarity with the area worked against me, because it seemed to be taking forever to get to the landmarks I know from long runs. It was also in this section that the 1:50 pacer went past us, which was demoralizing. Basically, this part was a struggle.

And I haven't even mentioned the damn wind yet. It was blowing across the path, off the lake, so at least it wasn't a headwind, but every time a gust would hit me I would swear a bit because it wasn't fun to run with, at all.

At this point I'd been holding a second gel in my hand for about 3k, trying to talk myself into taking it. I was pretty sure a shot of sugar would be helpful, but I just could not seem to bring myself to actually rip it open and eat it. Finally around 16k I managed to get about half the pack down, and tossed the rest at a water station. It did seem to help a bit. I also had a side stitch, but lately I always seem to get a side stitch during races and I'm getting pretty good at ignoring them.

At 17k we finally reached the turnaround to head back towards the finish. Amy was pulling away at this point and Patty and I kept yelling at her to just GO when she would slow down to wait for us. Since she didn't run Scotia I had been figuring she'd have a bit more left in her legs towards the end of the race, so I wasn't surprised.

The good part of the turnaround was we were finally heading towards the finish. The bad part was now we were on the beach side and were getting the full force of THE WIND. It was not good (master of understatement I am). Towards 20k Patty started to pull away from me and I couldn't work up the energy to keep up with her - my legs felt so heavy and tired and it was a constant battle with my brain telling me to stop and walk. I had to keep thinking about what I had written on my hand to force myself to just keep moving forward. 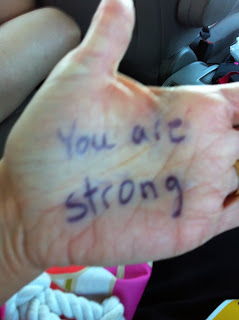 About 500m from the finish there was a runner lying on the ground being given chest compressions with a huge group of people around him. I hope he's OK - news reports say he was taken to the hospital.

As I rounded the corner to the finish I tried to kick a bit but that wasn't happening. All I could think about was the race finally being over and that I just wanted to stop running and maybe never ever run a race again (as usual, the 'never race again' thoughts vanished pretty much the moment I crossed the finish).

So on the one hand, I felt like the last part of this race was a huge struggle. Way harder mentally than the last 5k of Scotia, that's for sure. But on the other hand, I did take a couple of minutes off that Scotia time. Looking at my paces during the last part of the race I didn't fade nearly as badly as it felt at the time - I would have sworn I was running 5:50s through that last 5k. And I didn't stop to walk even though I REALLY wanted to. So now that I sit down and look it over, I feel pretty great about this race overall. The dream of a sub 1:50 half feels a lot more achievable!

I would run this race again for sure, and in fact I've already tentatively penciled it into my fall 2014 plans. The organization was great  - lots of buses to get to the start, warm place to wait, well organized finish area, and super sexy warming jackets at the end instead of space blankets. I really enjoyed the route, and it was a great final half for the year to take advantage of being in fall race shape.


When I got home, my wonderful husband had a plate of pancakes ready for me. I don't know if they were actually the greatest pancakes of all time, or if they just tasted so good because I was literally shaking with hunger by the time I sat down to eat them. Thanks to him, not just for the pancakes, but for being so supportive of all this crazy running nonsense. I promise, not as many races next year!

Next up is a visit to my physiotherapist to figure out just what the heck is going on with that groin strain - I thought it was fully healed but clearly not. Then, Sunday is the Downsview 5k. I have no expectations for this 5k. I plan to spend much of this week lounging around like a great big slug, and even with that I doubt I'll be fully recovered from this half before that race. Downsview is really my husband's day - it's his first race ever. I'm so excited to see how he does and to share the race excitement with him.