I initially signed up for this year's Chilly because, frankly, I missed seeing my running friends and was having some serious Fear Of Missing Out. And not doing ATB this year was making me a little sad, so I figured this was a more sensible consolation race. Shorter distance, nice race shirt, could make for a solid catered training run with a medal at the end. No sweat.

So I didn't taper for it, or really change my planned schedule much other than skipping one swim (more due to laziness than anything else), shortening my Friday run, and skipping my Saturday run. I did my prescribed TrainerRoad workouts full gas, no changes, meaning I racked up quite a bit of training stress on Thursday/Friday/Saturday before the race. But hey, the Chilly would just be a training run, no biggie.

Saturday night I realized my lazy attitude towards the race meant I hadn't checked if I had any gels, and it turned out I didn't. On long runs I usually eat whatever random gummy candies we have around for the kid's school lunches, but those are tricky to eat while racing. Fortunately, Ivanka came to my rescue and said she'd bring me a gel. Whew. Note to self: buy a few gels to have on hand just in case!

Since the Chilly has a late start, Sunday morning was pretty leisurely. Ate a breakfast sandwich, drank some tea, and headed downtown to get a good parking spot and hang out with Zindine and chat Ironman training for a bit until the girls arrived. People asked me a few times what my goal was and to be honest, I hadn't really given it a lot of thought. I didn't want to run super hard and risk disrupting the next week's training with recovery, and I'd handicapped myself nicely with that whole three hours long bike ride the day before, but the race atmosphere worked its magic and I, almost unconsciously, decided I'd just run what felt good and see how it played out.

And I had absolutely no clue how it was going to feel. I've stuck almost completely to easy running for about 9 months now, aiming to loosely keep my heart rate down to a reasonable number. I don't subscribe to any particular number or approach (I'm not following Maffetone, for example) - more I use my heart rate as one signal to judge if I'm running easy or not. Some days the old ticker just insists on a higher heart rate for whatever reason (a poor night's sleep, hot weather, hormoes, etc), so I don't worry too much about the exact details, as long as the run feels truly easy. Whereas before I often pushed harder than I should have to make the final pace number on Strava look prettier, now I try not to let the overall run pace be a factor in how hard I run.

But this approach means I went into this race with no speedwork, no tempo runs, and no idea how it might feel to run 5:30s or 5:20s or 5:10s, or how long I could hold any of those paces (my training runs typically fall around 6:00/km). But I was feeling completely zen about the whole thing and ready to just let things unfold.

Got separated from everyone before the start, which was fine. I wanted to run my own race. The start corral was tremendously annoying, with people pushing to try and move closer to the front, but whatever. Zenlike calm. It's a half. No goal. Just enjoy yourself.

Gun goes off, shuffle shuffle, finally across the start, immediately start passing the pushy chicks who'd forced their way in front of me in the corral.

Nicole pretty quickly came up behind me and commented on the pace. I glanced at my watch. 5:10/km? "Well, I think that was downhill?" I said optimistically and slowed up a bit. Nicole had an assigned workout and pace to do, so she said she was going to drop back and I wondered if I should go with her, but I was feeling good and I could see the 2:05 and the 2:00 pacers not far ahead of me, so I figured I'd at least get ahead of the two hour pacer and kept going.

I didn't look at the pace on my watch too much, mostly I just glanced at the heart rate to see if I could keep it around 170 bpm for as long as possible. I was feeling comfortable and figured I wasn't running all that fast because it took 3 km to finally catch up to the 2 hour pacer - and as I was going past him I heard him say, oh shit, I'm 30 seconds ahead.

Huh. I don't feel like I'm running that fast, but considering I was probably at least 30 seconds behind him in the corral, if not more, I may be running too fast. But it feels so comfortable, I guess I'll just go with it?

So that's what I did. I kept half an eye on my heart rate but didn't pay much attention to the paces, and tried to shelter behind taller runners in the windy bits.

After passing back through downtown, I could see the ears of the 1:55 pace bunnies in the distance. Gradually, they started to get closer. Alright, let's see if I can catch up to them, run with them. 1:55 would be a solid race. I should probably slow down a bit. I mean, when's the last time I was running 5:18, 5:19/km? There's no way I can hold this pace!

At around 9k I caught them and started running with them. OK, this works, I'd be pretty thrilled to finish with a 1:55.

That lasted about 30 seconds. And I started to pull away from them. What are you doing?! Why does this feel so easy?!

I started watching for my friends coming back at the turnaround, and I don't think any of them were expecting to see me so soon because I had to shout at them to get them to notice me! Sam looked especially startled when I yelled at her!

Hit the turnaround at 13k, still feeling really, really good. And noticing my pace was, if anything, getting a bit faster?! OK. There's Marlene and Andy up ahead, let's chase them down and run in with them.

So I focused on Marlene's back for a while, eventually caught them, introduced myself to Andy who seemed somewhat puzzled by the fact all these friends of Marlene kept yelling at him, and then gradually started to leave them behind (they were pretty clearly doing some kind of workout and not running hard - Marlene is a much faster runner than I am).

The km were ticking off, still feeling good, and when I'd sneak looks at my pace I was seeing things like 5:12/km. I'd pick someone ahead of me, run until I caught them, then move on to the next target.

I have NEVER been that person late in a race. Usually I'm just trying to convince myself to keep going and feeling bitter at the people catching up and passing me! But not today. I just kept on reeling them in and moving on to the next one. Especially the guy who was not only playing his music through his iphone speaker (ugggggggh why people, why), but was playing Ed Fucking Sheeran. Really? REALLY? I had that stupid Gallway Girl song stuck in my head for like 8 hours after. Thanks ever so much, guy in bright yellow shirt.

At 18k, I happened to glance at my watch as it clicked over the km and saw my total time (I didn't have the total time displayed on the main screen). 1:34? But...

(here I tried to do math, which is always fun late in a race)

3k left. 5:10 per km, which is apparently a speed I am still capable of running, because that's what I'm running right now.

Holy shit that puts me finishing at around 1:51??!

I kept running the numbers around in my head and they kept coming up the same, so I pushed hard, feeling weirdly amazing, finally to the right turn to the finish on Brant, up into a wind like a brick wall (my god that last 100m was hard!), and then across the finish with this showing on my watch. 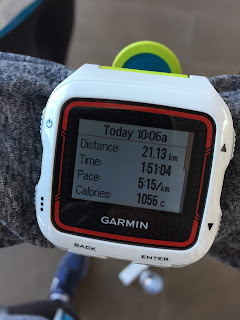 WHAT THE HELL JUST HAPPENED. I was so befuddled at the finish it took me 5 seconds to figure out how to stop my watch! 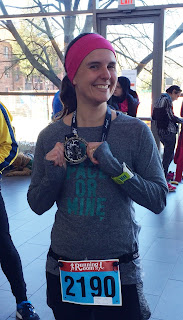 No race specific training. No speedwork. No tempos. And I was less than 30 seconds off my half marathon PB? I ran a beautifully paced race with a negative split of something like 80 seconds? Am I dreaming? Did that just happen?

Another #chillyhalf in the books with these gals. I love using this race as a long run workout! Nailed 14k at marathon pace while screaming out to all the friends that I passed on the out and back along Lakeshore. Congrats everyone 👊
A post shared by Sam J 🇨🇦 (@sammykaye71) on Mar 4, 2018 at 11:05am PST


If I had any doubts about stepping back and taking my easy runs truly easy to build a more solid aerobic base for my running, those are sure gone now. Something is working for me here. But of course I don't just run - I suspect all those Trainerroad hours have made a rather large contribution as well. I'm not doing running intervals or running tempo, but I've sure put in a lot of hours on the bike doing VO2 max intervals and the bike equivalent of tempo. I expect that fitness has crossed over.

But really, could I be any more pleased with myself right now? It was a crazy wonderful day that has given me a huge boost of confidence in my approach to training right now. This shit is working. I am excited to see what happens next!

(and now, of course, I'm a hair away from signing up for next year's Chilly half so I can really go for that elusive sub 1:50! Definitely a goal I think I'll be revisiting in 2019!)