Last triathlon for this year.

It was a good summer, with lots of steady progress after having my training in the winter so rudely interrupted by the death flu/bronchitis. So I was happy to have one last chance to string together a solid sprint distance swim-bike-run, and hopefully improve my series points from the 10th place age group in Milton (best three races count towards the series, and 10th doesn't get you many points...)


It felt ridiculously cold when I got the race site, and after picking up my kit and getting transition set up, I started sizing up everyone carrying a Tim Horton's cup and debating who I could take out and swipe their coffee just to have something to hold to warm up my hands.


Fortunately, before I could get myself arrested for grand theft coffee, some of my Iron Canucks teammates arrived and I was able to distract myself chatting with them and soon the sun had warmed things up enough I was no longer concerned I was getting frostbite on my fingers.

We were all debating back and forth what to wear on the bike - the lake temp was quite warm, but with the cool air temps I wasn't sure how that first few km on the bike would feel. I settled on leaving a set of arm warmers in transition and making the decision on the fly in T1.

Then it was off to the lake to warm up, where I stayed in the water until after the first wave had started, since the water temp was warmer than the air!

I positioned myself in the second row close to the start flag, and soon we were off. It was a surprisingly violent swim - I think I was on someone's feet almost the entire time (including one girl who I swear was deliberately switching to breaststroke and trying to kick me when I'd occasionally brush against her - WTF?! We are all getting groped and grabbed out here! No need for that!). It also ended up being a little bit choppy, and at one point I turned to breathe and unfortunately got hit in the head by another swimmer just as a wave hit my face and I got the fun experience of swimming and coughing at the same time. Yay!

(uh, to those now thinking 'fuck that I'm never doing a triathlon' it's not usually like that! I swear! You don't have to swim in the pack!)

Overall, it was a solid swim - I was out of the water in just over 15 minutes. The time looks longer because it includes a long run up a hill to the timing mat at transition.

I felt pretty warm as I stripped off my wetsuit, so I didn't bother putting on my arm warmers. Most of the bikes in my age group seemed to still be on the rack, and I also saw Fab one rack over and aimed to beat him out of transition, because what good is a friendly rivalry if you don't use it as motivation? He'd started a wave earlier so had a three minute head start, but seemed to be busy eating a three course meal or doing his nails or something and I ended up beating him out of T1.

As I exited, the announcer called my name and added 'she's been on the podium this season'. Whoa. That was a weird feeling.

Ah, the same old story on the bike. Going super fast, loving life, thinking wow I am going to have a fantastic time today!

And then hitting the turnaround.

How did I not realize??!

I could see Fab was really close behind me at the turnaround, so kept pushing even into the wind and over the craptacular pavement of the last 5k back to the park, expecting to hear him come up behind me at any second. Sure enough as I reached my transition rack, I heard the announcer call his name and knew I'd have to hustle to get through transition ahead of him!

There were two bikes already on the rack (d'oh) but with Fab hot on my heels I didn't pay much attention and switched my shoes as quickly as I could. Would have liked to have had this one under a minute; not sure why it took so long. And I totally forgot to grab my run visor, too!

The run felt pretty awful, and I'm kind of surprised it took Fab a full km to catch me. Damn. I chased him for a while just trying to keep him in my sight, and listening to the footsteps coming up behind me to see if they sounded 'female'. Mostly it was guys (it usually is), but no girls in my age group went past me. At least as far as I could tell - at least one of the bodymarkers had put on the age groups in miniscule numbering and they were impossible to see!

Spotted Marlene heading for the finish looking great, and sort of marveled at how much smaller the hills seemed compared to running them at the Olympic back in June. The difference in temperature really made a big difference in how painful it felt!

It wasn't a comfortable run but I got it done, and I'm pleased with how steady I held the pace. 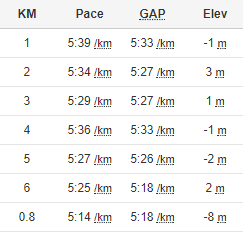 Crossed the finish where Fab was waiting, grabbed the nonachoholic recovery beer, took a sip, remembered I loathe beer and got rid of that in favour of a water bottle instead. Checked the results to find myself 3rd for age group! It felt pretty well earned. I raced hard and I'm very pleased with how that last race of the season went.


Now, on to other things. Like that BIG GIANT addition to my race schedule up in the corner. That deserves a whole separate post...
Posted by Emma at 4:10 PM