And now, my first triathlon.

My nerves were completely shot in the days leading up to this race. I can't remember the last time I was that nervous before a race. Maybe for the duathlon last fall, but this, with the addition of scary scary swimming, was on a whole different level.

Physically I was feeling pretty great, but mentally, not so much. Which was silly, because I totally knew I could do the distances with no problems, but still. Race nerves. Not fun.

Friday night I organized all my stuff. It is NUTS how much crap you need to take to a triathlon.

I also wrote myself a note so I wouldn't forget a key item (I forgot it when I did the Ride 4 Heart two weeks ago, although fortunately I remembered when I was only two blocks from home and was able to go back and get it).

Then this conversation happened: 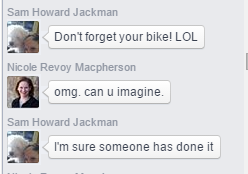 And I had to make an addition to my note: 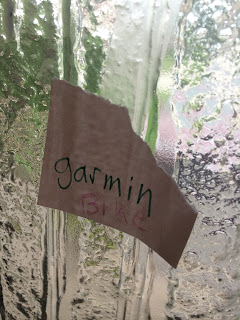 I WAS A LITTLE STRESSED, OK???

Arrived in Welland bright and early (with my bike, whew), and on pulling into the parking lot I immediately spotted my tri club teammates Michelle and Danielle, which somehow helped me relax. It's always nice to be in these things together.


Figured out the logistics, mentally rehearsed transitions and which direction to go for the bike and run exits, picked up my pretty sweet race shirt, got my transition set up, and sort of aimlessly passed the time chatting with teammates and visiting the bathroom until it was time to squeeze into our wetsuits and head for the water.

The canal wasn't as cold as I was expecting, and I did about 200m of swimming to warm up and hopefully help alleviate the inevitable Swim Panic, and then it was time to line up for the time trial start. As #101, I was the first blue cap after the first 100 people were in yellow caps, which was kind of fun, plus made it super easy to know where I needed to line up!

The time trial start (a swimmer every 5 seconds) was extremely efficient, and before I knew it I was off and swimming.

But just a little bit. I got it under control within about 200m and just focused on sighting the next buoy, and then getting to the green turn cone. Pretty much I Kimmy Schmidted it.

By the time we turned to come back towards the start I was almost enjoying myself! I took this very easy, as I'd planned. No sense swimming myself into hysterics in my first race. Someone grabbed my ankle early on, and I did get lightly kicked in the face at one point, but the time trial start meant there wasn't a lot of contact with the other swimmers. I got passed by a ton of people in blue caps (who would have all started behind me, since I was first blue cap), but I also passed a bunch of yellow caps, who started ahead of me. Kind of balanced out.

Swam up to the exit where a friendly volunteer hauled me out of the water, and then off on the loooooooooooong run to transition. That's about the only thing I didn't enjoy about this race - it's a good 400 meters from the swim exit to transition, and although it was over pavement, there were parts that were pretty rocky and rough on the feet. I did see a volunteer sweeping as many of the pebbles off the path as he could, which I appreciated! And one advantage of the long run up was I had plenty of time to strip down the top half of my wetsuit. Next year this race will be at the new flatwater center and probably won't have the long run to transition, which will be nice if I do it again.

Transition went smoothly, other than when I was trying to pull my wetsuit off my left foot and it JUST WOULDN'T GO and then I realized I'd hooked my fingers onto my timing chip. D'oh. Got that sorted and off on the bike. Kind of surprised my transition time was under 2 minutes, I was expecting it to be longer!

My favourite part. Always. Bikes are awesome. I got off to a rough start when I forgot to start my Garmin for 500m (I didn't wear it for the swim and left it on the bike), and then when I got up to speed my bike was vibrating in an odd way. I ended up stopping briefly to try and figure out what was wrong, but didn't see anything out of the ordinary, and when I started again the odd vibration was gone. So I don't know what that was about, but I'm glad I took the few seconds to stop and make sure everything was OK.

Settled into my aero bars, brought my cadence up, and commenced passing people. The best part! When I glanced down at my Garmin I was seeing speeds like 34, 35+ km/hr and it was blowing my mind. All that training had clearly paid off bigtime!

And then I reached the turn around.

Oh. There had been a tailwind. So my speed slowed a bit, but I kept it up above 30 km/hr for the rest of the ride. I could have pushed a little harder but I wanted to save my legs for the run. Look at me being all sensible and saving the suffering for the end of the race!

One kind of interesting thing is this was by far the flattest ride I've ever done. I don't think there was any elevation change at all! Way different than the terrain where I usually ride. It was quite a change to just try and hold the same power for a long period of time, rather than having to modulate my effort for hills. Frankly I think I would have liked a hill or two just to change things up a little bit. But overall, just an awesome ride.

Got back into transition (I have got to practice doing proper mounts and dismounts, this having to come to a dead stop to get off the bike is not ideal), and again I'm surprised how quickly I got back out again. It felt longer. Changed my shoes, changed headgear, grabbed my garmin and water bottle, and out the run exit. Very nice.

The run went really well! I felt like I was running through molasses, and if I'd had to guess I would have said I was running 6 minutes + per kilometer, but my watch was showing crazy things like 5:08, 5:15, and so forth. Sweet. Because the day was overcast there was no horrible sun to deal with, and pretty much ideal conditions to run. I stopped at two water stations to grab whatever sports drink they were serving (Heed, maybe? It's all a bit of a blur; whatever it was I would have preferred something sweeter) and walked briefly to drink, but other than that I just kept pushing and trying to maintain pace.

It sure wasn't comfortable, and there was a really depressing moment when we reached the duathlon turnaround and I was all 'but...they get to turn...I have to keep going???? UNFAIR!!!', and the triathlon turnaround felt like it was maybe located in Windsor and we'd never ever get there, and then the last kilometer took FOR FREAKING EVER, but overall this run was really good. I saved enough energy from the bike that it didn't become a death march, but by the end I was D. O. N. E. Overall I think I paced the race about right.

The final run to the finish line was sweet. I enjoyed every step. I've been working towards this triathlon for months now - basically since I first got into the pool back in December and could barely swim 25 meters without stopping for a rest - and having that work pay off felt amazing.

Before the race I had generally worked out how long I thought each part of the race would take, and my unspoken/unshared goal was to finish in under 2 hours. 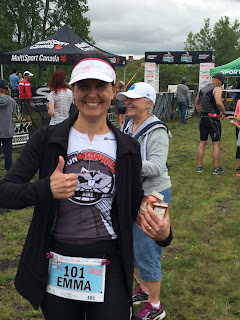 And I can't wait to do it again! So much fun. So excited to have this whole new world to explore and push my limits. Time to get stronger, faster, and maybe see if I can't find myself a podium spot at some point...