Around the Bay 2015 Race Report


Around the Bay #4 is in the books. I have always had a lot of trouble pacing this race. 2015 would be no different, but the end result is something I'm pretty proud of. 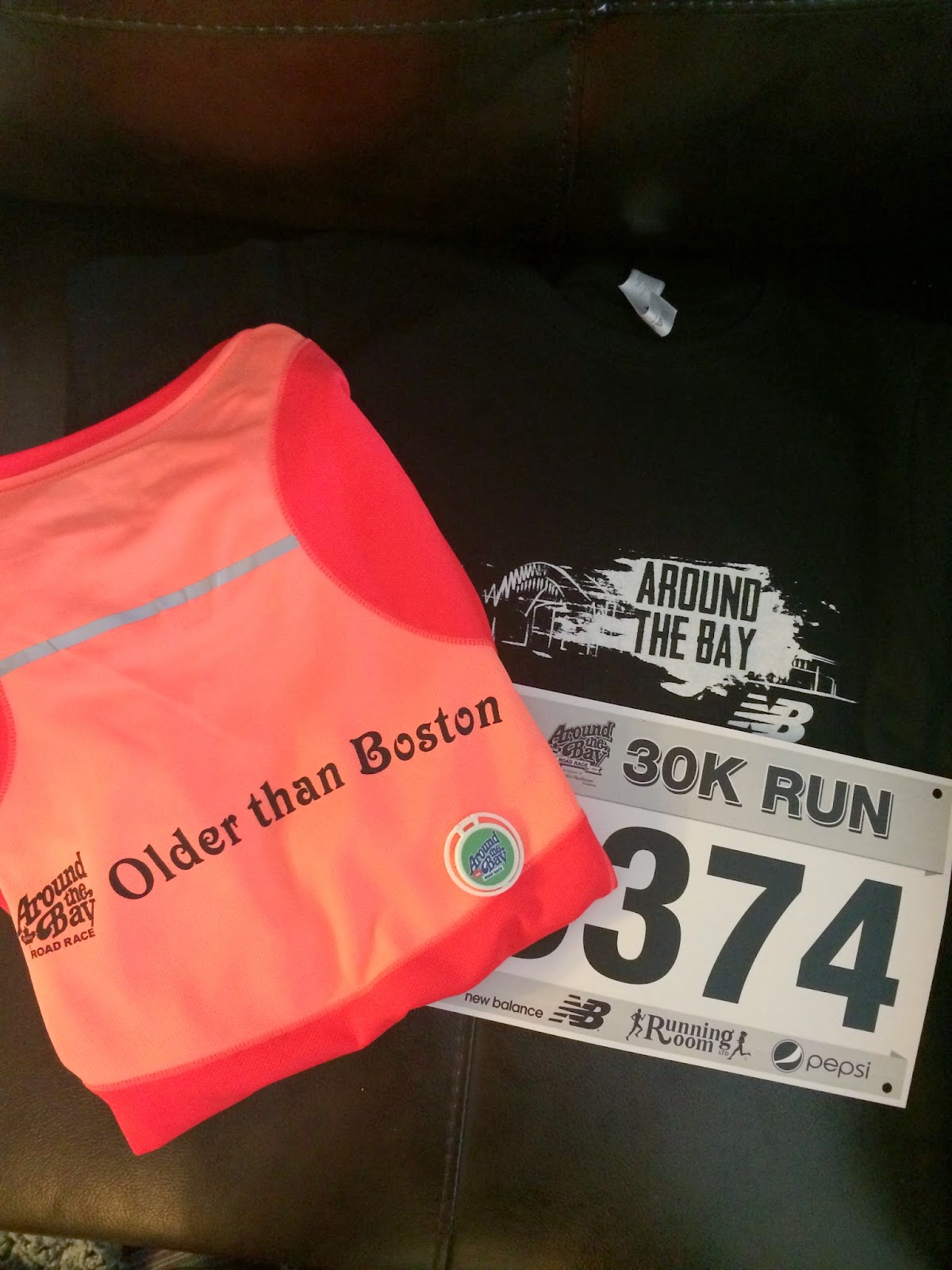 Race day, just like last year, dawned cold, leading me to second guess all my clothing choices. That is also an Around the Bay race tradition. But I resisted the urge to overdress and stuck with my long sleeve and crops combo - basically the same thing I wore for Road 2 Hope, since that worked there and conditions looked similar.


My brother picked me up and we got to Coppsthe arena (whatever it's called now) absurdly early, as is our family tradition. It's all about tradition with this race. It was nice to relax and have time to chat nervously with the rest of the Daily Mile crew as they arrived.


Soon enough one last trip through the bathroom line and then Amy and I headed back to the open corral (everyone else had corral seeding and got to be fancy up at the front). We worked our way to the right position by the pace signs, and within a few minutes we were off.


Amy was planning a somewhat slower pace, so it wasn't long before I was solo. The plan was to run 5:28/km.

(as an aside, I'm super impressed with how well the corral system has worked over the last two ATBs. My first two ATBs the first km or two were a mess of dodging walkers - since they started the corrals I've been able to get to pace almost immediately, and no dodging around anyone)

Not so much with the 5:28s. Saw Patty for a bit, and we wondered what on earth was going on with the pacers. Not only was the 2:45 pacer well ahead of us, the 2:50 pacer was too! In fact for the first 3km the 2:50 pacer was in front of the 2:45 pacer (and he was well under 2:45 pace, too). I overhead the 2:50 pacer say something about her Garmin not working, so I knew I would need to just ignore the pacers and try not to let it mess with my head to have them in front of me. The 2:50 pacer did eventually fall behind, but it took quite a while. At least it gave me something to think about for the first part of the race!

The first 10k felt great. Obviously. Too fast. Although I did settle the pace down a little over the Burlington St. rollers (I'd forgotten how steep that first one is. And the second one you don't get to the downhill for quite a while so it felt like that km took forever). Around the ramp and over the 10k timing mat. Feeling fantastic. Even chatted briefly with another runner about triathlons (she was wearing a tri club jacket from a town where I'm doing a tri this summer). Took a gel at 8k, as usual. All systems go!

On the beach strip I found myself running with the 2:45 pacer, and he now seemed to be hovering around the 5:28/km or so I was aiming for, so I stuck with his group for a bit. There wasn't any wind, and I was starting to overheat a touch (I'd discarded my gloves within the first 3k of the race). I was a little worried about my clothing options, but nothing to do about it at that point. Crossed the 15k timing mat at the lift bridge feeling strong and confident.

After the lift bridge the route is no longer sheltered by houses on either side, and it felt like there was a bit of wind. Nothing too bad, and I took a gel at 16k. Spotted a Daily Mile friend (Ivanka) and said hello.

And then we turned onto Northshore. And it was a little like a switch flipped in my legs - my quads suddenly started to quietly protest. Although the true Northshore hills come later, km 18 and 19 have enough elevation change that you can start to feel it. And then 20k has the first real hill. The pace was no longer coming easy. And it got colder, so at least I was no longer worried about being overdressed!

Womp womp. Oh, those Northshore hills. Doesn't seem to matter how often I run them in training, they still kick my ass in the race. I ran them stronger than I ever have before during the race, but I couldn't get my legs back under me to ride the downhills fast enough to keep the pace under 5:30/km. When I crested the second big hill (the one after Lasalle Park) I was mentally preparing myself to take full advantage of the small downhill you get before you turn up to Plains...and got smacked in the face with the first real headwind of the day. I tried to tuck in behind other runners but it didn't make much difference. So instead of taking it strongly it became a struggle.

That little bit of headwind on the last part of Northshore? A gentle breeze compared to what awaited me on Plains and York. It was nasty. Many curse words were muttered. Again I tried to tuck in behind people but the wind just seemed to snake around them and it didn't help.


My quads had moved from quiet protest to picket signs and flaming oil drums and chants of Solidarity Forever ("What do we want? To stop running! When do we want it? Now!"). All I could think about (other than my burning quads) was getting some sports drink. I don't know why I fixated on that. I had water left in my Simple Hydration bottle, but I really didn't want water. And that's where that 6:12 came from - I grabbed a Gatorade from the last aid station and it tasted like heaven. The jolt of energy was exactly what I needed and I ran the last 2k in as hard as I could.


So on the one hand, AUGH. But on the other, I ain't even mad. The obvious culprit was that stop at the very last aid station - if I hadn't stopped, I wouldn't have had that 6 minute km. But if I hadn't stopped and taken the Gatorade, maybe I wouldn't have pulled out the faster last 2k and my overall time would have been even slower. If I could go back and change anything, I'd have grabbed the Gatorade the aid station BEFORE that one. That might have helped. But maybe not.

At any rate, I am incredibly happy with this race. Yeah, yet again I didn't pace it properly, but I did a hell of a lot better than I ever have before. And I got my 2:45! When I think about that it's almost unbelievable to me. Paces like this were a distant, crazy dream a few years ago (my first ATB? 3:29). In addition, I got a 7+ minute PB running significantly fewer miles in training than I did last year. Again, that seems a little crazy, but it's working for me. I don't see myself going back to being a single-sport athlete when it's clear that multi sport suits me so much better.

Post race, I met back up with my brother and the DM folks and a few others. Everyone was highly amused by my sudden inability to walk. Or climb stairs. Or stand up. My quads were NOT HAPPY. Seriously when I tried to get out of my seat to take a picture with my brother it took me about 2 minutes and the help of two other people. I think I hurt less after the marathon!

Finally, I want to say thanks to my 'unofficial coach' Zindine. I think I first met him at the ATB expo last year, and over the last year I've gotten to know him and his lovely wife Irina (photographer and ironman Irina!). Zindine helped guide me through buying my road bike last year, preparing for the duathlon, and then getting a indoor trainer and figuring out winter bike training. He and Irina even gave me a speed/cadence sensor for my bike to help me get totally set up. He recommended both the bike and run training plans that kicked my ass all winter long, helped me make modifications when needed, and is just absurdly generous with advice, congratulations when things go well, and commiseration when things don't. Getting put on the right track to training plans that work for what I want to achieve and that fit my abilities and the time I have available to train has been huge for me. I really don't know what I would have ended up doing without his advice - I doubt muddling through on my own would have been nearly as effective. Thank you so much for all your help, Zindine!
Posted by Emma at 9:49 PM

Email ThisBlogThis!Share to TwitterShare to FacebookShare to Pinterest
Labels: around the bay, race report